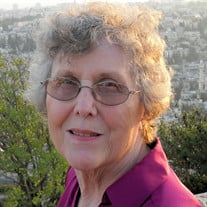 Mary Lou Samuelsen, educator, adventurer, wife, and mother, died peacefully from complications of age on December 31, 2018, in Orem, Utah. She was born in Salt Lake City, Utah, on October 24, 1935, to Harold Arthur Thorne and Mary Lucile Markham. Following the untimely death of her father in 1941, Mary, with her mother, and her four siblings, moved to Provo, Utah where they lived with her grandmother, Mary Markham. Mary graduated from Provo High School in 1953. After tagging along with a Boy Scout hike, she met the one great love of her life, Roy Samuelsen. Following his military service, they were married in the Salt Lake City Temple on May 25, 1955. After Roy graduated from Brigham Young University, they moved to Bloomington, Indiana, for graduate school and remained there post-graduation as Roy joined the faculty at the Indiana University School of Music. Roy became an internationally renowned opera singer, with Mary always by his side. Mary earned a BA and MA in Education from Indiana University and, in 1968, she began a 31-year teaching career in Nashville and Bloomington, Indiana. She was an innovative and extraordinary teacher. For many years, she worked with her elementary school students to write, compose, and produce original operas. She eventually won a grant from the Metropolitan Opera and worked with the Utah Festival Opera to expand the outreach of student written original opera performance. Mary and Roy were world travelers, eventually visiting 80 countries and all seven of the continents on the globe. Mary was also an opera lover, visiting many of the world's great opera houses. Mary served as president of the Monroe County Retired Teachers Association. She was also president of the Alpha chapter of Delta Kappa Gamma, a society for leading women educators. She worked as a child advocate for CASA, a national organization dedicated to protecting children. And she loved her work as a Wonderlab volunteer, a children’s science museum. Mary was a dedicated and committed member of The Church of Jesus Christ of Latter-day Saints. She served in many leadership roles in the church including Ward Relief Society President and Stake Young Women's President. In 1997, she and Roy were called to serve as full-time missionaries to Norway and they served as temple workers for 15 years in Louisville, Kentucky. Mary was a deeply spiritual woman, a leader, a thinker, a loyal friend, and a great lover of children. She was an avid reader, quilter, basketball fan, camper, water skier, and a wonderful grandmother. She is survived by three sons: Eric (Annette), Robert (Ellen), and Rolf (Dawn); her sisters, Janice Dixon, Joyce Michelson, and Sally Taylor, and her brother James Thorne; 13 grandchildren, and nine great-grandchildren. She was preceded in death by her husband of 62 years, Roy Samuelsen. Funeral services will be held at 11:00 a.m., Saturday, January 5, 2019 at the Grandview 3rd Ward Chapel, 900 West 2150 North, Provo, Utah. Friends may visit with the family after the services. Interment will be in Valhalla Memory Gardens, Bloomington, Indiana on January 19. In lieu of flowers, donations made be made in Mary’s honor to www.CASAforchildren.org and condolences may be expressed at www.bergmortuary.com.

The family of Mary Lou Thorne Samuelsen created this Life Tributes page to make it easy to share your memories.

Send flowers to the Samuelsen family.