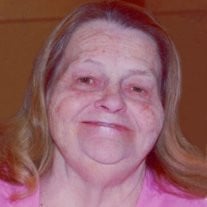 Marylyn Baxter, beloved mother, sister and daughter, passed away on the night of August 14, 2013. She was the oldest of five children born to David Hitesman and Emma Fox Baxter on October 13, 1943 in Lindon, Utah. She married Elmo Garn Blood and had six children: Marilyn (Stacey) Blood, Loren (Susan) Blood, Sandra (Bill) Clark, Kevin (deceased), Michelle (Jayson) Jensen and Judy (Artie) Jasper. They later divorced. She lost one child to accidental drowning in an irrigation ditch. She had a rough life, but would always be ready for a hug and a smile. She loved her kids, and fought so hard to keep them. She tried to keep in touch with them all throughout their lives. Now she is their guardian angel. Even though she dropped out of school, she still got her G.E.D. She worked at D.I. for many years. After that she married Glen Stanford Larsen. They had no children together but she inherited two step-children, Ralph and Pam. They later divorced. She moved to Provo and found a nice apartment with terrific neighbors and a great landlord who helped her throughout the last nine years. She went through the Temple on August 7, 2010. She did a lot of volunteer work at The Eldred Center for Senior Citizens and made many friends there. She will be missed by all who knew her. Marylyn is survived by her five children; four siblings: Dan Baxter, Dick Baxter, Kay Baxter and June Ross; 14 grandchildren and 13 great-grandchildren. She loved her family, friends and hugs. We would like to thank Geraldine Miller for all the love, friendship and care you gave to her. She loved you dearly and was looking forward to having you as her next door neighbor. Funeral services will be held at 2:00 p.m., Wednesday, August 21, 2013 at the Berg Drawing Room Chapel, 185 East Center Street, Provo, Utah. Friends may call one hour prior to services. Interment will be held at 2:00 p.m., Thursday, August 22 in the Provo City Cemetery, 610 South State Street, Provo, Utah. Condolences may be sent through her obituary at www.bergmortuary.com.

Marylyn Baxter, beloved mother, sister and daughter, passed away on the night of August 14, 2013. She was the oldest of five children born to David Hitesman and Emma Fox Baxter on October 13, 1943 in Lindon, Utah. She married Elmo Garn Blood... View Obituary & Service Information

The family of Marylyn Baxter created this Life Tributes page to make it easy to share your memories.

Send flowers to the Baxter family.