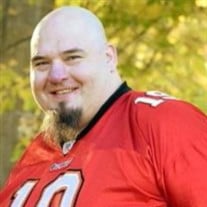 It is with heavy, compassionate hearts that we must announce the untimely loss of Matthew Taylor Moore. “Matt” returned to his Heavenly Father the morning of December 30, 2020. Matt was a very loving husband, father, brother, son, and uncle. Matt was larger than life with an enormous heart, infectious smile and made lasting friendships daily. Matt was the youngest of five children born to Gerald Lee Moore and Bonnie Brumfield on March 1, 1978 in Newport News, Va. He was always up for a joke and made everyone laugh all the time. He and his family moved to Pleasant Grove, UT when he was 11. Matt always had a deep love for sports, especially football. He played football as a child and in high school his team won State in Utah. He also played semi-Pro for the Salt Lake Nemesis team for a short time as an adult and coached his son’s team as well. He loved the Tampa Bay Buccaneers above all other NFL teams, collecting many team collectables and was known to always have his Buccaneer team gear on or displayed wherever he was. Matt and Mandy (Amanda) had a long history and love just as deep. In their early 20’s, they were set up on a blind date by one of Matt’s coworkers who just happened to be married to Mandy’s twin sister. They hit it off and dated for about 6 months and then in 2013, they ran into each other again. It was not long after that they became inseparable. During their dating years, they overcame a lot of trials and learned what unconditional love truly was. On April 28, 2017 they were married in Las Vegas with their children in attendance. Matt loved being a father. He did all he could to make his home a place where everyone was welcome. Talisa and Matt shared a bond as only a father and daughter could and she was his pride and joy. Matt also enjoyed spending his spare time watching football with Zander and teaching him all he knew. He was a wonderful stepfather who loved Miles and Evelyn in such a way that you would never question the sincerity. Matt was preceded in death by his grandparents, his father, and several aunts, uncles, and cousins. Matt is survived by his wife Amanda Cosman, his daughter Talisa Moore, his sons Cameron Moore and Alexzander Moore, also his two stepchildren Miles Raye Cosman and Evelyn Cosman. Matt is also survived by his mother, Bonnie Moore, stepfather, Dee Stephens, his older siblings; Angela Carter, Brian Moore, Tammy (Scott) Withy, and Kimberly (Koa) Lum as well as many nieces and nephews. Due to Covid-19 a memorial service will be held at a later time. Condolences may be expressed to the family at www.bergmortuary.com.

It is with heavy, compassionate hearts that we must announce the untimely loss of Matthew Taylor Moore. &#8220;Matt&#8221; returned to his Heavenly Father the morning of December 30, 2020. Matt was a very loving husband, father, brother, son,... View Obituary & Service Information

The family of Matthew Taylor Moore created this Life Tributes page to make it easy to share your memories.

It is with heavy, compassionate hearts that we must announce...

Send flowers to the Moore family.