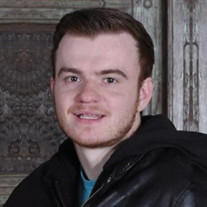 On Monday, January 3, 2022, our beloved Matthew Bryan Oppel completed his mission here, and graduated this earthly life. After fighting and enduring a battle of drug addiction, we know he is now in the loving arms of his father, grandfather, and those who have gone before him. He was born September 15, 1995 in Orem, Utah to Cindy Sue Eastman and Kenneth John Oppel. He lived in Orem, Utah with his parents and siblings until he was 3 years old, then his family moved to Pennsylvania. While living in Bangor, he attended Five Points Elementary. He enjoyed playing little league baseball with his brothers Travis and Cameron and being coached by his dad. When he was 9 years old his family moved back to Orem, Utah. He attended Vineyard Elementary. As a young boy he enjoyed riding horses, playing outdoors, and spending time with his friends and cousins. Matt attended Orem Jr. High, Mountain View and Summit High Schools in Orem, Utah. While attending Summit High School, he earned the President’s Academic Achievement Award and a college scholarship. He played guitar and his band played at his graduation from Summit on May 30, 2014. Matt was a member of The Church of Jesus Christ of Latter-day Saints. As a teenager he served in the Aaronic Priesthood. He enjoyed scouting, campouts, and service projects with the young men and leaders in his ward. Matt met and married Erin Fage on December 18, 2015. They were blessed with two boys Ryan Matthew Oppel (5) and Jace Aaron Oppel (3). Matt and Erin later divorced. Matt never stopped loving his boys and always wished he could be a better father. He was proud to be sober this Christmas and able to buy his boys Christmas gifts with the money he had earned working at UIS Metal Fabrication. Matt attended Utah Valley University in Orem, Utah intermittently from 2018 to 2020. He loved astronomy and studying the stars, moon, and solar system. They were captivating to him, and he wanted to become an astrophysicist and work for NASA. Matt was a hard worker and worked at a variety of food service jobs as a teenager and young adult. His favorite job was working at Hobby Lobby while attending UVU, and most recently building trusses at Premier Building Supply. Matt was a jokester, loved pranks, and making others laugh. People often said he would light up the room. Although Matt struggled with his own troubles, he was sensitive to others’ feelings and needs for comfort. He was always ready to give a sincere hug when needed. Matt loved a good challenge. He couldn’t pass up a claw machine when he saw one. His favorite pastime and hobby was conquering video games. He was an expert at playing Call of Duty and at one point was number one in the world. He was sure he was going to become a professional gamer. His favorite foods were mac and cheese, spaghetti noodles with butter, root beer, and he loved candy, especially Fast Break bars. Matt loved to watch football and his favorite team was the Miami Dolphins. He is preceded in death by his father, Kenneth John Oppel; grandfathers, Kenneth Albert Oppel and Rodney Gordon Eastman; uncle, Adam Eastman; his great grandparents, Jack and Penny Hinkle, Gordon and Bertha Eastman, Doyle and Helen Thurston. He is survived by his mother, Cindy Sue Eastman Oppel; brothers, Cameron (Kelsey) Eastman, Travis Oppel; sister, Courtney (Calum) Daley; his children, Ryan Matthew Oppel and Jace Aaron Oppel; grandmothers, Michele Thurston Eastman and Elizabeth Oppel; and numerous aunts, uncles, nieces, nephew, cousins, and in-laws. Funeral services will be held at 11:00 a.m., Thursday, January 13, 2022 at the Park 4th Ward Chapel, 50 South 750 West, Orem, Utah. The viewing will be held Thursday, January 13 from 9:30 a.m. to 10:45 a.m., prior to services (masks are recommended). He will be interred in Orem City Cemetery following the funeral. Condolences may be expressed at www.bergmortuary.com. For those unable to attend the funeral in person, the following link may be used to watch a livestream of the services: https://zoom.us/j/93741057708. Matt would want everyone to view those with addiction as Heavenly Father’s children and not as the world views them. Remember to be kind, love without judgment and reach out to those in need. The family would like to thank his counselors and other professionals who have worked with him over the years and most recently the staff at Papilion Integrated Recovery Center.

On Monday, January 3, 2022, our beloved Matthew Bryan Oppel completed his mission here, and graduated this earthly life. After fighting and enduring a battle of drug addiction, we know he is now in the loving arms of his father, grandfather,... View Obituary & Service Information

The family of Matthew Bryan Oppel created this Life Tributes page to make it easy to share your memories.

Send flowers to the Oppel family.