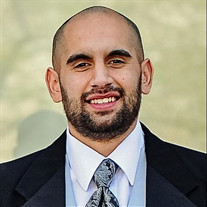 Matthew Maluhia Wayas passed away on Saturday, June 22, 2019. He was born May 3, 1987, to Wayne and Chris Wayas in Orem, Utah, where he lived throughout his childhood. After graduating from Timpanogos High School, Matt enlisted in the U.S. Army, where he served for seven years and deployed twice to Iraq. During his first deployment, Matt served as a cavalry scout, and in his second tour, he served as a combat medic. Although Matt enjoyed the opportunities and service provided through the military, above all, he valued the many friendships he made during his years in the Army. After his military service, Matt attended University of Washington where he received a Bachelor’s degree in criminal justice. In his free time, Matt enjoyed anything related to sports. He played football, baseball, and golf, and he trained in mixed martial arts. He also loved to watch any type of sporting event and always seemed to stay on top of sports trivia and statistics. He especially loved the Philadelphia Eagles, the Atlanta Braves, Real Salt Lake, the Brigham Young University Cougars, and his alma mater, the Washington Huskies. In addition, Matt loved outdoor sports such as fishing and shooting. With all of these interests, Matt seemed most happy when he was enjoying them with his family, particularly his nieces and nephews. He also consistently took time to do the things that each niece or nephew would want to do. Each one of them knew Uncle Matt would be up for Nerf gun wars, wrestling, arcade outings, fort building, nonstop sports, or any activity kids love. Matt is survived by his parents; his siblings, Jennifer, Kanani, Ui, Stephanie (Josh), Jonathan (Pleasy), and Melinda (Dave); his nieces and nephews, Marion, Brianna, Tyler, Erin, Cooper, Duncan, Makoa, Imogen, Ikaika, Kapono, Blythe, Kekoa, Makana, and Kaleo; his grandmother, Josephine Wentz; and many aunts, uncles, cousins, and friends. He was preceded in death by his brother, Wayne A. Wayas Jr., and his grandparents, Aurelio and Madeline Wayas and Bruce Wentz. Memorial services will be held Wednesday, July 3, 2019, at 11:00 a.m., at the Geneva Heights Fourth Ward LDS Chapel (857 West 800 North, Orem, Utah), with a visitation from 9:30 a.m. to 10:30 a.m., and interment at the Provo City Cemetery. In lieu of flowers, please donate to The Wounded Warrior Project or a charity of your choice. Condolences may be expressed at www.bergmortuary.com.

Matthew Maluhia Wayas passed away on Saturday, June 22, 2019. He was born May 3, 1987, to Wayne and Chris Wayas in Orem, Utah, where he lived throughout his childhood. After graduating from Timpanogos High School, Matt enlisted in the U.S.... View Obituary & Service Information

The family of Matthew Maluhia Wayas created this Life Tributes page to make it easy to share your memories.

Send flowers to the Wayas family.