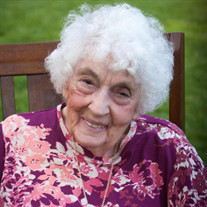 On Wednesday, July 22, 2020, Maude MacCene Maynard Grimmett—our beloved mother, grandmother, great-grandmother, great-great-grandmother, and friend—passed away peacefully in her home at the tremendous age of 107, surrounded by her loving family. MacCene was born June 13, 1913, to Henry and Della Warner Maynard in Lewiston, Idaho, the 1st of 3 children. When she was eight years old, her family moved to Provo, Utah, where MacCene graduated from Provo High School in 1931—in the midst of the Great Depression. Two years later, she married the love of her life, BYU basketball great, Richard G. Grimmett, on June 13, 1933; they were sealed for time and all eternity in the Salt Lake City Temple of The Church of Jesus Christ of Latter-day Saints in December of 1952. MacCene and Richard were active members of the LDS Church and served two missions together—one in Birmingham, England and another in Christchurch, New Zealand. But their greatest love was working with the youth of the Church, where they influenced forever the lives of hundreds of young people in Provo and throughout the world, many of whom have reached out with both condolences and life-changing stories. MacCene also served for 13 years as a Stake Young Women’s President and on the General Board of Young Women, where she was instrumental in creating the Young Women’s Personal Progress Program. MacCene was also a well-known and respected businesswoman at The Daily Herald, Geneva Steel, and Brigham Young University, where she worked as Payroll Director for 35 years, completely computerizing the department while there. MacCene was also a gifted, self-taught pianist and organist who not only played by ear, but could on the spot miraculously transpose any piece of music into any desired key. Not only did she play in church, and at countless wedding receptions and social functions, but she also accompanied the famed women’s choir, The Chauntenettes, for many years. MacCene was a prolific writer, who penned hundreds of cards and letters to not only the young people she served, but also to the many family, friends, associates, and missionaries, with whom she worked throughout her life. Till her dying day, she stayed in touch with everyone on Facebook! MacCene’s greatest joy was raising her five beautiful daughters—Karen, Dixie, Penny, Mary, and Colleen (who preceded her in death due to cancer). In her 107 years, MacCene experienced nearly the entire Twentieth Century, which included the Roaring Twenties, the Great Depression, two World Wars, the Fabulous Fifties, the tumultuous Sixties, the Civil Rights Movement, the Women’s Movement, and every single stage of technology that has transformed our world into what it is today. She also voted in 19 U.S. presidential elections and sustained 12 presidents of the LDS Church, many of whom she knew personally. MacCene is survived by her loving daughters: Karen (Blaine) Quarnstrom (Spanish Fork, UT); Dixie Grimmett (Huntington Beach, CA); Gloria “Penny” Spresser (Spanish Fork, UT); and Mary Tilson (Provo, UT), as well as 18 grandchildren, 26 great-grandchildren, and 7 great-great-grandchildren (with another on the way). She was preceded in death by her parents, siblings, husband Richard, daughter Colleen Palfreyman, son-in-law Marvin Spresser, and grandson Michael Quarnstrom. The family would like to thank all those who so lovingly cared for MacCene during her final years, which allowed her to continue living in comfort in her own home—most especially her beloved daughter, Dixie. Graveside services will be held at 11:00 a.m., Thursday, July 30, 2020 at the Provo City Cemetery, 610 South State Street, Provo, Utah. Friends may call at the Berg Mortuary of Provo, 185 East Center Street, Wednesday, July 29, from 6:00-7:30 p.m. Please bring your own chair, wear a mask, and observe social distancing. Condolences may be expressed to the family at www.bergmortuary.com. In lieu of flowers, a donation may be made in her name to the Huntsman Cancer Foundation, 500 Huntsman Way, Salt Lake City, UT 84108.

The family of Maude MacCene Maynard Grimmett created this Life Tributes page to make it easy to share your memories.

Send flowers to the Grimmett family.