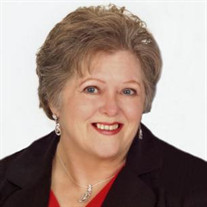 Maureen Olivia La Nier Johnson – mother, wife, daughter and friend – passed away at age 72 at the Heritage Care Center in American Fork, Utah of natural causes. Maureen was born on March 3, 1943 in Houston, Texas to Mildred Opal Baker and John Martin La Nier. She grew up in Houston and attended Pasadena High School. She married William Maurice Cornick and together they had seven children: Nancy, Tracy, Cathy, Debbie, Tammy, Michael and James. She later married Wilfred “Bill” Leander Johnson on September 24, 1982 in Orem, Utah. They loved each other dearly and were very happy together. Maureen often said how grateful she was to have married him. During her lifetime Maureen worked as a medical receptionist for multiple offices and was recognized with several awards and honors. She also worked at the Provo Sears Teleservice where she was recognized for her customer service. Maureen was always extremely proud of her home state of Texas, and loved anything to do with The Lone Star State. She also loved bluebonnet flowers – yes, Texas bluebonnet flowers. She loved collecting antiques and visiting historical sites, especially in Texas. Has it been mentioned she was very proud to be a Texan? Maureen had a love of her animals and pets, especially her dog named Chip. She was especially proud of her grandchildren and their many talents and accomplishments. After being converted to The Church of Jesus Christ of Latter-day Saints, Maureen held church callings throughout her life and enjoyed being a member of the Church. Maureen is survived by her husband Bill Johnson and her seven children: Nancy Rodriguez, Tracy (Scott) Folsom, Cathy (Daniel) Shin, Debbie (Travis) Waters, Tammy (Jared) Saxton, Michael (Bonnie) Cornick and James Cornick. She is also survived by many grandchildren, several great-grandchildren, her siblings Bill (Virginia) La Nier, Clayton Jeter, and Sue (Newt) Rudy, and good friends Beverly Johnson and Debbie Sykes. Maureen was preceded in death by her father John La Nier, and his wife Helen La Nier; her mother Mildred Jeter, and her husband B.E. Jeter; her brother, Ercell and his wife Frances Jeter; and her granddaughter Athena Cornick. Funeral services will be held at 11:00 a.m., Friday, January 22, 2016 at Berg Mortuary, 500 North State Street, Orem, Utah. A viewing will be held prior to the service at the mortuary from 10-10:50 a.m. prior to services. Interment will be in the American Fork City Cemetery. Condolences may be extended to the family at www.bergmortuary.com. In lieu of flowers, donations are appreciated at any Central Bank under the "Maureen Johnson Memorial Fund".

The family of Maureen Olivia La Nier Johnson created this Life Tributes page to make it easy to share your memories.