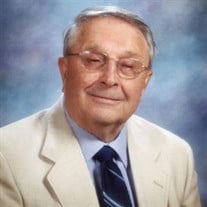 Max Duane Nelson died on Wednesday, December 9, 2020 at the Bennion Veterans Home in Payson, Utah. Max was born on February 9, 1926 in the home of his great-grandfather Lars Peter Nelson in Provo, Utah. He was the youngest of three children born to Henry Arthur and Ida May Nelson. He is survived by one brother, Kenneth (LouEtta) Nelson, Orem, UT; five children, Michael (Liz) Nelson of McCammon, ID; Rand (Andrea) Nelson of Las Vegas, NV; Lisa (Kent) Harmon of Provo, UT; Lance (Carolyn) Nelson of Arvada, CO; and Lars (Johnna) Nelson of Leonardtown, MD. He is also survived by 22 grandchildren and 39 great-grandchildren. He was preceded in death by his parents Henry and Ida Nelson; his Eternal Beloved wife, Betty Gene Gabbitas Nelson; a brother, Merlin Nelson; and a great-grandson, Adam Piet. Although born in Provo, he was raised in various towns in Idaho until his enlistment in the army after graduating from Rupert High School. During WW2 he served in Europe in a division under the command of General George W. Patton. He actively participated in the allied Rhineland Operation of the invasion of Nazi Germany. There his unit was involved in the liberation of one of the infamous concentration camps, an experience that had a deep impact on him. Returning from the war, he attended BYU and it was in Provo that he met and courted Betty Gene Gabbitas. They were married in the Salt Lake Temple on August 17, 1949. In the spring of 1950, Max graduated with his Bachelor Degree in Business and Accounting from Brigham Young University. During his high school and college academic years, Max participated on several athletic teams and played the sousaphone in the marching and pep bands. After graduation, he was hired by US Steel in the accounting department at Geneva. They made their home in Provo until 1960, during which they were blessed with the births of Michael, Rand, and Lisa. US Steel transferred Max to a mining operation near Lander, Wyoming. It was here that Lance and Lars were born. In December of 1968, Max accepted an offer to work at the MolyCorp Questa mine in New Mexico, so the family moved to Taos. They lived there 18 months, then MolyCorp transferred Max to a mine in Mountain Pass, California so they moved to Las Vegas, Nevada. They resided in Las Vegas until 1979, when MolyCorp offered an opportunity for Max, Betty and the two younger children to move back to Taos where they lived until 1988. Upon retirement, they moved back to Las Vegas to be closer to family. By then, glaucoma had greatly reduced Max’s eyesight, and that coupled with Betty’s declining health required greater assistance than living alone could provide. By taking turns living in their children’s’ homes, they were given loving care until 2003 when Betty passed away in Provo. Max was able to continue that practice, primarily with Lisa in Provo, which created a great bond with his children and grandchildren. This past autumn the level of care he required prompted the family to take the opportunity to utilize a vacancy in the Bennion VA center in Payson, Utah. There he received excellent care until he passed away quietly on December 9th. Max was an active member of The Church of Jesus Christ of Latter-day Saints, serving in the Provo Seventies Quorum, as a branch President, Bishop, High Councilman, and other administrative and teaching assignments. He served a mission with Betty in the Sacramento, California Mission from 1986-1988, and they served as ordinance workers in the Las Vegas, Nevada Temple from 1990-1999. After retirement they also traveled to 42 states and 13 foreign countries, including Sweden and England, which were the countries of their ancestry. Funeral services will be held at 1:00 p.m., Tuesday, December 15, 2020 at the Berg Drawing Room Chapel, 185 East Center Street, Provo, Utah. Friends may call from 12-12:50 p.m. prior to services. Interment will follow at the Provo City Cemetery, with military honors performed by the VFW. Condolences may be expressed at www.bergmortuary.com.

Max Duane Nelson died on Wednesday, December 9, 2020 at the Bennion Veterans Home in Payson, Utah. Max was born on February 9, 1926 in the home of his great-grandfather Lars Peter Nelson in Provo, Utah. He was the youngest of three children... View Obituary & Service Information

The family of Max Duane Nelson created this Life Tributes page to make it easy to share your memories.

Max Duane Nelson died on Wednesday, December 9, 2020 at the Bennion...