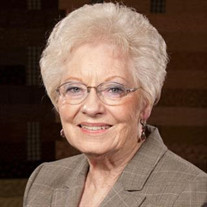 Maxine Varley Davis Stay returned home to her Father in Heaven, June 13, 2017. She was born July 27, 1931 in Vineyard, UT to Lowell Pratt and Anita Viola Hansen Varley. She married Don Keith Davis on June 7, 1950 in the Salt Lake Temple. Keith died in a car accident on March 13, 1967. She married Dennis Gunn Stay on October 6, 1970. Maxine is survived by her five sons: Lowell Lynn (Lori), Don Keith (Sherry), Roger J. (Debbie), Russell Wayne and Paul Reed; two daughters: Carin Louise and Jeannette (Steve Hall); step-children: Rachael Stay, Doug (Marla) Stay and Richard (Aneta) Stay; and all of her grandchildren and great-grandchildren. She was preceded in death by her husband Keith, Parents Lowell and Anita Varley and her sister Colleen Judd. Mom was a great seamstress. She sewed all of our clothes when we were younger sometimes altering “hand-me-down” clothes in order to fit us. She was also a great cook making the best pies and pastries, especially her cherry pies, cinnamon rolls, candies, and chocolate cakes. She has made some of the most beautiful quilts and counted cross stitch pictures. She also loved making porcelain dolls and ceramics. Mom served in many church callings most notably pianist and organist. She served several years as an organist in the Mount Timpanogos Temple. The family wishes to express our sincere thanks to A Plus Hospice Care and a special thanks to her daughter Jeannette and son-in-law Steven Hall for their loving care in the most difficult of times. Funeral services will be held at 11:00 a.m., Monday, June 19, 2017 at the Orem 2nd Ward Chapel, 80 South 280 East, Orem, Utah. There will be a viewing at the Berg Mortuary of Provo, 185 East Center Street, Sunday, June 18 from 6-8:00 p.m. and at the church Monday from 10-10:45 a.m. prior to services. Interment will be in the Provo City Cemetery, 610 S. State Street, Provo, UT. Condolences may be expressed at www.bergmortuary.com.

The family of Maxine Varley Davis Stay created this Life Tributes page to make it easy to share your memories.

Send flowers to the Stay family.