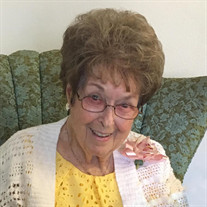 Maxine Sondrup Thomas, 90, passed away peacefully on March 11, 2021. She was born in Salt Lake City, January 4, 1931, to Denzel and Teresa Watson Sondrup. She was the second child; her older brother Keith was 2 years older. Her parents owned and operated Sondrup Photo Studio located on 332 W Center Street in Provo. She spent many of her childhood hours in the photo studio taking pictures of herself, her dog, her friends, and even her dolls. We always teased her because in the hundreds of pictures she took she wore a massive bow in her hair and sat in a perfect pose. She was always ready and willing to have her picture taken. She could pose and flash a perfect smile the moment you called her name. She also spent time traveling with the carnival with her parents as they operated the mobile photo studio. This provided Mom with many fun and interesting experiences. When Mom was 12 her father passed away. Mom, Keith, and their mother continued the photo business for many years afterwards. Mom grew up in Provo attending Franklin Elementary, Dixon Jr High and graduating from Provo High school class of ‘49. During her senior year of high school, she met the shy Richard “Dick” Thomas, a basketball player. She knew all of his friends but didn’t know him until then. They were married November 11, 1950 and later sealed in the Salt Lake Temple. Together they had four sons: Hal, Ken, Lou, and Max. Mom had a close relationship with each one of her boys and was very proud of them. Dick passed away in 2016 after 65 years of marriage. After the boys were in school, Mom decided to enter the workforce starting at P.E. Ashton’s car dealership in accounts payable. She then worked at a dental office, at Rocky Mountain Helicopters, and finally, at the BYU ticket office. At each job, she met and became close friends with many, many people and they have remained close up until the time of her passing. Mom enjoyed music, and it was always playing in the home. She loved the holidays and decked her house, herself, her children, grandchildren, and great-grandchildren in all sorts of socks, shirts, sweatshirts, dishtowels, hot pads, glasses, hats, etc. On Christmas Eve everyone received Christmas Jammies and for several years the grandchildren’s jammies were all homemade. Some of the great-grandchildren are still wearing the jammies their parents wore as kids. Without exception, everyone received a 4th of July t-shirt every year. At birthday time, all of the grandchildren had a special cake made and decorated by grandma, and the decorations on the cake were whatever was “cool” at the time. She liked to have special plates and glasses for holidays and parties. It was all about dressing everything and everyone for the occasion. Mom’s favorite treat was cake and she preferred it unfrosted. There was never a cake made by grandma that did not have the corner taken out of it before it was frosted. Some cakes were missing more than one corner. In their early 40’s, Maxine and Dick bought themselves each Trail 90 motorcycles and they spent countless hours and miles on those bikes. She was always fun and adventurous. At 48 years of age she took up snow skiing. When going out on the Sand Rail, Mom had to have her turn driving. The same went for jet skis, 4-wheelers, and snowmobiles. Mother took great pride in her home and in her ability to work and still come home and make dinner, do the wash, iron, bake cookies, clean, and then wake up the next day to do it all over again. She was fiercely loyal to her family. She loved and worried about every single one of her 12 grandchildren, 9 great-grandchildren, and 3 great-great-grandchildren. She is survived by 3 of her 4 sons: Kenneth Denzel (Kori) of Pleasant Grove, Louis Harlan of Provo, and Max Keith (Cathy) of Provo. Also, by her sister-in-law, Sherma Sondrup (Keith, deceased) of Orem, and Dick’s sister, Sally Stephens (Dale, deceased) of Monroe. She was preceded in death by her husband (Dick), her son (Hal) and his wife (Lynne), her parents (Denzel and Teresa Sondrup), step father (Francis Anderson), her brother (Keith), brother-in-law (Dale Stephens), and Dick’s parents (Harlan and Fern Thomas). Funeral services will be held at 11:00 a.m., Wednesday, March 17, 2021 at the Grandview 14th Ward Chapel, 1122 North Grand Avenue, Provo, Utah. Friends may call at the church, Tuesday, March 16 from 6-8:00 p.m. or Wednesday from 10-10:45 a.m. prior to services. Interment will be at the Provo City Cemetery. Condolences may be sent at www.bergmortuary.com. Those who cannot attend are invited to view a live stream of the services at http://mywebcast.churchofjesuschrist.org/Player?eid=14452.

Maxine Sondrup Thomas, 90, passed away peacefully on March 11, 2021. She was born in Salt Lake City, January 4, 1931, to Denzel and Teresa Watson Sondrup. She was the second child; her older brother Keith was 2 years older. Her parents owned... View Obituary & Service Information

The family of Maxine Sondrup Thomas created this Life Tributes page to make it easy to share your memories.