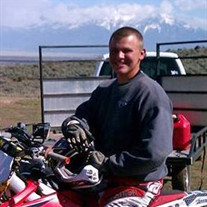 Our joyous son, brother, uncle, nephew, and friend McKay has left us to join forces with the angels. McKay’s last moments with us were spent doing what he loves most being outside hunting fishing and enjoying Gods beautiful earth. Unlike those who spend a lifetime just learning to be happy, gracious kind and loving McKay lived that way from day one. McKay and Connor came into his world together on August 20th, 1997 in Orem, Utah. His older brother Chase rode his bike every day to the hospital to hold his little hand. From that point on McKay was always Chase’s little buddy Kano or Kano Latte. In his very short 16 years with us here on earth he touched as many lives, taught as many lessons, shared as many gifts, and spread as much love and wisdom as most only dream to accomplish in their time here on earth. McKay loved making people laugh, smile and have fun. He had an amazing gift of listening and understanding, with a helping hand for all. His heart was as pure as the mountain streams and he shared his deep abiding love with all his friends and family. He loved freely and openly and never allowed walls of fear or self-doubt to dim the light of his love. McKay was active in his priesthood quorum in the LDS church. He changed the tone of the priesthood quorum and made sure to leave a positive impression wherever he went. His love and influence touched the hearts and souls of those who walked with him for a season, reason, or lifetime. McKay was blessed with both great talent and a drive to seize each opportunity and put it into play. He had the opportunity to skate the Black Pearl Bowl in the Caymans and conquered his fears. He expressed his love of music in singing, composing and playing the guitar. He excelled in skateboarding, fishing, hiking, biking and all things outdoors. McKay’s hard work and diligence in school allowed him to graduate a full year early with honors , and he was also given the opportunity to be a keynote speaker at his graduation ceremony. Putting all these accomplishments and remarkable qualities aside, McKay’s most prized quality was the fact that none of these things is what mattered most to him. McKay was the most humble, sweet soul. He just wanted to be there...to love and touch the people around him. His life was not about himself, but was focused on the people he loved –he will continue this for all of us- as our guardian angel. “McKay always loved to be in the high mountains, so we should look for him in high places.” He is survived by his Mom Dyanne Richan, his sisters Mindy (Spencer) and Shana ( Julio), his brothers Chase and Seth, his twin brother Connor, and his nephew and nieces Bridger, Timberlyn, Aspyn and Ireland Uncle Brook (Debi) Richan His Father, Eugene Stevens and stepmother Mary, his sisters Jordan (Ryan), Sydney ( Jeremy), Sarah (Shayne), and Kayla, his niece and nephew Faelyn and Peter and numerous aunts uncles and grandparents. Tracy Werre (Momma Race) and Dennis, his sisters Lisa, Jill (Zack) and Kristy (Casey), his brother Scott (Shelby), his Uncle Travis and Aunt Deborah, and his nieces and nephews Bones “Landon, Jameson, Brinklee, Kasen, Cache and Eden. We invite all friends and family members to do us the honor of bringing your boards to the Orem Cemetery after the funeral at 1:30 Friday …... before his burial for one last ride with McKay. Ushering him from this life to his next. Funeral services will be held at the LDS Chapel located at 475 N 1600 W (Highway 89) Mapleton, UT at 11:00 am Friday, August 15th 2014. A viewing will be held from 6:00-8:00 pm on _ursday, August 14th 2014 at the Berg Mortuary at 185 E Center St, Provo, UT and on August 15th, 2014, prior to the funeral, at 9:30 am at 475 N 1600 W (Highway 89) Mapleton, UT. Burial will be in the Orem Cemetery 1520 North 800 East at 1:30 Friday following the funeral.

Our joyous son, brother, uncle, nephew, and friend McKay has left us to join forces with the angels. McKay&#8217;s last moments with us were spent doing what he loves most being outside hunting fishing and enjoying Gods beautiful earth. Unlike... View Obituary & Service Information

The family of McKay Keith Stevens created this Life Tributes page to make it easy to share your memories.

Our joyous son, brother, uncle, nephew, and friend McKay has...

Send flowers to the Stevens family.