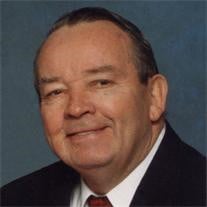 Melvin Lee Evans passed away peacefully with his sweet wife by his side, May 30, 2011. He was born in the family home in Spanish Fork, the seventh of eleven children, on December 12, 1929, to Forrest Glen and Jennie Delilah Jensen Evans. His mother died when he was 13 and his father was ill. He and his siblings worked hard to help support their family and raise each other. He met his wife, Janet Richmond in July 1953. He proposed a few months later. They were married February 17, 1954 in the Salt Lake L.D.S. Temple. They were blessed with four children. Lee was a member of the Spanish Fork National Guard from 1948 until departing for the Korean War. He was a Sergeant First Class Gun Chief. He returned from the war in 1952. He was always very patriotic and respected the flag. He would always say, “Look, old glory, how beautiful is that?” He worked at Geneva Steel for 33 years. He took pride as a union man. He had a strong testimony of Jesus Christ and honored his priesthood; holding many church callings which included serving as Stake Missionaries with his wife. He was involved with church sports for 27 years. His great love was youth sports. He coached central Utah and city teams in Spanish Fork and Springville. He also refereed games everywhere. He won first place in several tournaments. With the trophy he earned, he would turn and give it to a boy who struggled to be a winner. In church he was always known as “the candy man”. He didn’t wear a sport coat or suit that didn’t have pockets bulging with candy to give to his friends both young and old. Lee is survived by his wife, Janet, of 57 years; children Kathy (Dennis) Alger, Garth, Stuart “Yogi” (Eloise) and Sandra (Clint) Myers; sister Erma (Morlin) Conder; brother Alan (Judy) Evans; 16 grandchildren; 21 great-grandchildren and counting! He was preceded in death by his parents; siblings Bernice, Glen, John, Esther, Paul, Dean, Cliff and Jolene; and son-in-law Bryon Carter. Funeral services will be held at 11:00 a.m., Friday, June 3, 2011 at the Spring Creek 1st Ward Chapel, 860 East 200 North, Springville, Utah. Friends may call at the church Thursday evening from 6 until 8 and Friday morning from 9:30-10:45 a.m. prior to services. Interment, Springville Evergreen Cemetery. Condolences to the family may be sent to www.bergmortuary.com. In lieu of flowers, “Take a kid to a ball game!”

Melvin Lee Evans passed away peacefully with his sweet wife by his side, May 30, 2011. He was born in the family home in Spanish Fork, the seventh of eleven children, on December 12, 1929, to Forrest Glen and Jennie Delilah Jensen Evans. His... View Obituary & Service Information

The family of Melvin Evans created this Life Tributes page to make it easy to share your memories.

Melvin Lee Evans passed away peacefully with his sweet wife by...

Send flowers to the Evans family.