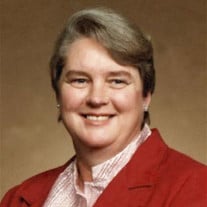 Melvina Bulow Dyer, 77, passed away Saturday, Nov. 28, 2015 at Utah Valley Specialty Hospital, where she was surrounded by her four sons just prior to returning home to a reunion with her loving husband, Robert Dyer. She was born Dec. 7, 1937 in Manti, UT, to William and Zenda Bulow. Melvina moved to Provo, UT at the age of 6. She graduated Provo High School and went on to study art at Brigham Young University for a year. On July 16, 1959 she married Robert Gordon Dyer in the LDS Manti Temple and together raised four boys in Provo. She enjoyed bowling and was a member of several leagues in her younger years. She had a gift for creating things with her hands, whether it was drawing, flower arrangements, quilts or many other crafts. She served in many church positions and on the Police Mutual Aid Association where her husband worked. Melvina worked for 23 years at Provost Elementary School as a Lunch Lady and later as the Lunch Room Manager. She was a favorite of many students that attended school there. She started working when her youngest son began school, as it was her goal to always be there as a Mother first. Melvina is survived by her four children: Robert Kent Dyer (Nancy) of Layton, UT; Kenneth Dean Dyer (Beth) of Nazareth, PA; John Howard Dyer of Provo, UT and Steven Richard Dyer of Farmington, UT; 16 grandchildren, and was soon to have her first great-grandchild. She was preceded in death by her husband, Robert Dyer; her parents and two brothers, William Ray Bulow, Robert Lynn Bulow, and daughter-in-law, Lisa Ann Dyer. Funeral services will be held at 11:00 a.m., Friday, December 4, 2015 at the Bonneville 13th Ward Chapel, 1498 East 800 South, Provo, Utah. Friends may visit with the family at the Berg Mortuary of Provo, 185 East Center Street, Thursday from 6-8:00 p.m. and at the church Friday from 10-10:45 a.m. prior to services. Interment will be in the Provo City Cemetery. Condolences may be extended to the family at www.bergmortuary.com.

Melvina Bulow Dyer, 77, passed away Saturday, Nov. 28, 2015 at Utah Valley Specialty Hospital, where she was surrounded by her four sons just prior to returning home to a reunion with her loving husband, Robert Dyer. She was born Dec. 7, 1937... View Obituary & Service Information

The family of Melvina Bulow Dyer created this Life Tributes page to make it easy to share your memories.