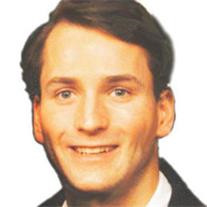 Michael Joseph Clayton, age 41, of Provo, passed away on July 27, 2012, due to complications of multiple sclerosis. He was born on October 8, 1970 in Murray, Utah to Keith Joseph Clayton and Connie Marie Hall of Springville/Provo. Michael is best remembered for his friendliness and kindness by those who knew him. He graduated from Timpview High School, where he was voted among one of three "Most Preferred Men." An active member of The Church of Jesus Christ of Latter-day Saints, Michael said his service as a missionary in the Eugene Oregon Mission was one of the highlights of his life. Michael greatly enjoyed being in the outdoors and loved to hike and camp. He achieved the rank of Eagle Scout and was a member of the Order of the Arrow just before his 13th birthday. His three brothers were also Eagle Scouts. Michael had many other interests and talents including the collection of old watches, paintings and historic artifacts. He taught himself how to repair old watches and was a master craftsman. During his working years, Michael led a very productive life. He used his hands skillfully as an offset printing plate maker, a printing press operator, and as a photographer and film developer. When personal computers were developed, he loved learning how to operate and repair them. He succeeded in everything he set his mind to. During the years prior to his death, Michael was a skilled technician as an operator of the electron microscope at US Synthetics of Orem, Utah, the world leader in the production of artificial diamond-tipped tools for industry. Michael's primary love and concern was always for his two daughters, Katherine and Jane. His thoughts were constantly focused on their success and happiness. He loved being with them and teaching them skills that would bless their young lives. After being diagnosed with "Severe, Rapidly-progressive Multiple Sclerosis" several years ago, his every free moment was focused on creating a legacy to leave for their care and education. Michael is survived by his parents, Dr. Keith and Connie Clayton, and his siblings: David (and Hyea Won) Clayton of Pleasant Grove; Lisa (and Stuart) Ashton of Provo; Julie (and Joseph) Campbell of Provo; Dr. Matthew (and Melissa) Clayton of Provo; and Amy (and Ryan) Bonham of Lehi as well as by his Austrian "sister" Elfreida Panholzer. He is preceded in death by his grandparents, Vaughn & Eunice Clayton and Arthur & Della Hall, and his brothers Keith Joseph Clayton, Jr., and Jonathan Joseph Clayton and by his Chinese "grandmother" Susan T'sien, all of whom we loved dearly. Funeral services will be held at 11:30 a.m., Friday, August 3, 2012 at the Sherwood Hills Chapel, 345 East 4525 North, Provo, Utah. Friends may call at the Berg Mortuary of Provo, 185 East Center Street, Thursday evening from 6:00 – 8:00 p.m. and at the church Friday from 10:00 – 11:15 a.m. prior to the services. Interment will be at East Lawn Memorial Hills, 4800 North 650 East, Provo, Utah. Condolences may be sent through his obituary at www.bergmortuary.com.

Michael Joseph Clayton, age 41, of Provo, passed away on July 27, 2012, due to complications of multiple sclerosis. He was born on October 8, 1970 in Murray, Utah to Keith Joseph Clayton and Connie Marie Hall of Springville/Provo. Michael is... View Obituary & Service Information

The family of Michael Clayton created this Life Tributes page to make it easy to share your memories.

Michael Joseph Clayton, age 41, of Provo, passed away on July...

Send flowers to the Clayton family.