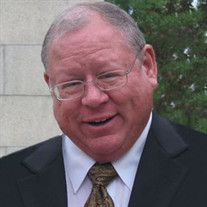 Michael Duane McGarry returned to his Heavenly Father on Friday, July 11, 2014, at his home in Provo, Utah. He was born in Jacksonville, Florida, on October 31, 1945, to Bernard Duane and Relva Johnson McGarry. Mike married his eternal sweetheart, Madalyn Jones, on December 11, 1970, in the Salt Lake LDS Temple, and together they had four children. Mike grew up in Provo, and graduated from Provo High School and Brigham Young University with a degree in Business Management. He worked with his father, grandfather, and brother in the family floor coverings business, where he enjoyed meeting new people each day out on the job. He continued in the business until he was forced to retire due to illness. Mike had a special love for the Scouting program, and served as Cubmaster and Scoutmaster, was a Provo Peaker, and was awarded the Silver Beaver in 2006. He mentored many young men through the scouting ranks to earn their Eagle, as he had, including his three sons. A member of the LDS Church, Mike served faithfully in many callings, including various scouting positions, as well as leadership in the Elders Quorum, and as a counselor in the Stake Young Men’s Presidency. But perhaps his favorite calling, other than scouting, was being a dedicated home teacher to many families, whom he loved and supported, and entertained with his stories. Mike was a member of the National Ski Patrol for 25 years. He served as Asst. Patrol Leader, Patrol Leader, and was on the Board of Directors of the Sundance Ski Patrol. He later held the positions of Section First Aid Advisor and Section Avalanche Advisor for both the northern and southern divisions in Utah, as well as being a member of the Utah Awards Committee. He also served in the Utah National Guard for six years. He made friends easily, and loved meeting and talking to people wherever he went. He was a master storyteller, and had an endless repertoire of tales about his life’s adventures and memories. Mike will be most remembered for the great love he had for his family. He never had a conversation without mentioning them in some way. His children and grandchildren were the light of his life, and he never hesitated to tell them so. He was their hero, and in turn, they were his. He is survived by his loving wife, Madalyn; his children Anne, Dan (Rebecca), Jon (Brittany), and Dave (Natalie); and his grandchildren, Alisha, Morgan, Luke, Reagan, Landon, Madison, Easton, Hayden, Jaxon, and Oaklyn. He is also survived by his sister, Mary Payne, and his brother, Mark. He was preceded in death by his parents, beloved grandparents, and countless other loved ones, with whom he had a joyful reunion on Friday. Funeral services will be held on Thursday, July 17, at 11:00 a.m. at the Grandview 16th Ward LDS Chapel, 1260 West 1150 North, Provo, UT. Friends may call at Berg Mortuary of Provo, 185 East Center Street, on Wednesday, July 16, from 6:00-8:00 p.m., and at the church Thursday from 9:30-10:45 a.m. Interment will be at the Heber City Cemetery. Condolences may be sent online at www.bergmortuary.com.

Michael Duane McGarry returned to his Heavenly Father on Friday, July 11, 2014, at his home in Provo, Utah. He was born in Jacksonville, Florida, on October 31, 1945, to Bernard Duane and Relva Johnson McGarry. Mike married his eternal sweetheart,... View Obituary & Service Information

The family of Michael Duane McGarry created this Life Tributes page to make it easy to share your memories.

Michael Duane McGarry returned to his Heavenly Father on Friday,...

Send flowers to the McGarry family.