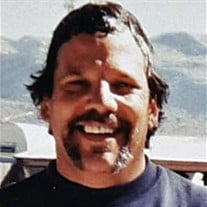 Michael George Peterson, 57, departed this life as he slept Friday, April 19, 2019. We are all grateful for the peace he was able to find before he died. Mike was born March 7, 1962 in the American Fork Hospital to Jerry Burt Peterson and Kent F. Peterson. Mike’s parents met while his dad was playing professional baseball for the Cincinnati Reds. They fell in love and settled in Orem, Utah where they raised their 5 children and attended the Orem Community Church. Growing up Mike enjoyed hunting and fishing with his dad and his brothers. Throughout his life he spent a lot of time in the outdoors. His favorite places to be were the family’s cabin at Strawberry Reservoir and fishing on the Provo River. He had a deep connection with nature and an amazing understanding of the energies around us. His sanctuary was sitting by the river, chatting with the birds. Mike was intelligent and witty. Although he endured more hardships than most, he was resilient and had a unique sense of humor. Mike was a storyteller, to say the least, and he shared his infinite wisdom and points of view with all whom he loved. He was also incredibly generous. Although he didn’t have much, Mike would give anything he could to help others. Those of us that knew Mike were very fortunate to have shared experiences with him, and now we’re fortunate to have him watching over us. The family would like to thank the countless individuals that have helped to care for Mike and keep him safe over the years including the numerous doctors and staff at the Utah State Hospital and the Spanish Fork Nursing and Rehab Facility. Also, special thanks to members of Wasatch Mental Health especially Darsi and her team. His big sister, Suzie was his ‘living angel’ as she provided continual support, love, and friendship to Mike through all of the good and the bad times. Mike was preceded in death by his mother and father, Kent and Jerry Peterson, his wife, Cindy Peterson, and his brother Jim (Puda) Peterson. He is survived by Jim’s wife Delone, his sisters Suzie (Neal) Vance, and Debbie Peterson, his brother Kent (Vera) Peterson, his biological sons, Si Berrett and Brandon Berrett, and his many nieces and nephews. The family will be holding a private memorial in Mike’s honor.

Michael George Peterson, 57, departed this life as he slept Friday, April 19, 2019. We are all grateful for the peace he was able to find before he died. Mike was born March 7, 1962 in the American Fork Hospital to Jerry Burt Peterson and Kent... View Obituary & Service Information

The family of Michael George Peterson created this Life Tributes page to make it easy to share your memories.

Michael George Peterson, 57, departed this life as he slept Friday,...