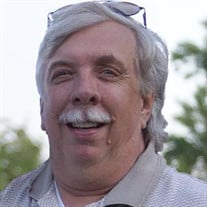 Michael G Scott passed away suddenly from the results of Mesothelioma on December 20, 2019 at the age of 68. He was born on August 6, 1951 in Provo, Utah to Charles Hal Scott and Geraldine Giraud. Michael grew up in Southwest Provo in the same house we live in now. He had many adventures such as falling off a cliff and “fishing” in Utah Lake with his partners in crime: brother, Alan; cousin, Bruce Argyle and childhood friends, Bob Moulton and Stan Littlefield. He attended Franklin Elementary, Dixon Junior High and Provo High School. He attended Utah Trade Tech (now UVU) where he received his associate’s degree in drafting. He later attended BYU for additional education in Computer Science. He worked in foundries in New Jersey, Iowa, Springville, Payson and then Geneva Steel. Unfortunately, this led to his most recent diagnosis of Mesothelioma. He married Susan Kay Pace on May 2, 1975. Together they had 5 children; they later divorced. The Pace family has always been a part of his life. They always considered him as a son and brother. He married Janet Ann McLendon on December 30, 1997. Michael was an active member of The Church of Jesus Christ of Latter-day Saints. He was a scout leader for Sunset 10th Ward and the Ward Clerk for Sunset 13th Ward. His favorite thing was shooting. He was the secretary for the Utah Defensive Pistol League for the last 7 years. He traveled the country, going to state matches in Arizona, Colorado, Idaho, Nevada and Tennessee. He was self-employed as a Network Administrator. His favorite client was Mountain Country Foods. He enjoyed and cherished the friendships he made there. He was our “one call away” computer whiz for family and friends across the country. He could walk you through almost any problem you encountered. He is survived by his wife, Jan; children: Michael (Byrony) Scott, Melissa (Ian) Sandgren, Sam (Lindy) Scott, Greg (Dot) Scott and Jess (Krispen) Scott; step daughter, Kris (David) Hoil; 19 grandchildren, 2 great grandchildren; his mother, Geraldine; brothers, Alan (Marylee) of Provo and John Scott; and sister, Rebecca (Becky) Harris of Chattanooga, TN. He will be missed by his furry companions Zeva and Ellie. There will be no formal funeral service at Michael’s request. Graveside services will be held on Monday, December 30, 2019 at 11:00 a.m. in the Eastlawn Memorial Hills Cemetery, 4800 North 650 East, Provo, Utah. The family will receive friends on Sunday, December 29, 2019 from 6:00 until 8:00 p.m. in the Berg Drawing Room Chapel, 185 East Center Street, Provo. Condolences may be expressed at www.bergmortuary.com. In lieu of flowers, please grab your loved ones, hug and kiss them, and tell them you love them every day.

Michael G Scott passed away suddenly from the results of Mesothelioma on December 20, 2019 at the age of 68. He was born on August 6, 1951 in Provo, Utah to Charles Hal Scott and Geraldine Giraud. Michael grew up in Southwest Provo in the same... View Obituary & Service Information

The family of Michael G Scott created this Life Tributes page to make it easy to share your memories.

Michael G Scott passed away suddenly from the results of Mesothelioma...