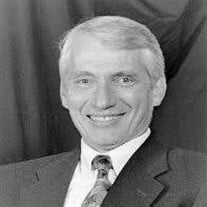 Mike was born in Mount Summit, Indiana to Phyllis Beavers Shively and Alan Shively. He returned to his heavenly home in Provo, Utah on August 19, 2019, with his family at his side. He was preceded in death by his parents, two brothers, and one sister. He is survived by his loving wife of 40 years, Ann; five children, Jeff Shively (Linsey), Sheri Meyers (Jay), Dori Pye, Lori Pye (Jacqui), and Jim Pye; 12 grandchildren and one great-grandchild; a brother, Jeff Alexander, and a niece and nephew. Mike earned his DVM, M.S, and Ph.D. from Purdue University. He taught both veterinary and human anatomy and physiology before coming to Utah Valley University, where he has taught anatomy and physiology for the past 27 years. He was a prolific author in peer reviewed scientific journals as well as a solicited reviewer with four more publications currently in preparation. He was past president of the UVU Faculty Senate, former Department Chair in the Department of Life Sciences, and Faculty Athletic Representative. He was appointed the Human Anatomy Program Coordinator in 1993, redesigning the curriculum and building a program that has earned statewide and national recognition. Mike served the UVU community in various ways through support of the Wolverines in not only attending various athletic events, but also playing his trumpet at games. He enthusiastically kept UVU in both the state and national arenas through presentations at scientific meetings, being a grant recipient multiple times, and serving on university, national, and international committees. He served on the search committees for a past UVU president and new faculty members. He was the recipient of multiple citations, awards, and honors during his tenure at UVU, including nine teaching awards and five-time Teacher of the Year. Mike wrote poetry, songs, and possessed a great love for music. He was an accomplished musician on both trumpet and guitar; he was always honored to play his trumpet for Wolverine games, and his guitar when students requested it. He played with the American Fork Symphony and Sarge’s All Star Band. He wrote love songs for his dear wife, Annie, poetry and journals for his children, and humorous verses (containing anatomical terms and anatomy lab jargon) for his many students over the years that he set to common tunes which occasionally resulted in rather ribald humor. He was also a marathon canoe racer and five-time champion and former record holder in various classes of the Tx Water Safari. He taught all of his children to paddle and they all retain a love of nature, exploration, and stewardship of the earth along with a healthy competitive spirit when in a boat. Mike was a husband and father most of all, but also a good friend, neighbor, and incredible human being. He was a builder of decks and of critical thought. Because of the thousands of students he taught, who in turn will serve thousands of others, Mike’s legacy will continue to touch lives for good. A life celebration will be held at 11:00 a.m., Saturday, August 24, 2019 at the McKell Residence, 202 Hobble Creek Canyon, Springville, Utah, followed by graveside services at 2:00 p.m. at the Historic Springville Cemetery, 200 West 400 South, Springville, Utah. A viewing will be held Friday, August 23, from 6-8:00 p.m. at the Berg Mortuary of Provo, 185 East Center Street. Condolences may be expressed at www.bergmortuary.com. The family wishes to express heartfelt gratitude and appreciation to the trauma, neurosurgery, and critical care teams at Utah Valley Regional Medical Center for their outstanding care and support.

Mike was born in Mount Summit, Indiana to Phyllis Beavers Shively and Alan Shively. He returned to his heavenly home in Provo, Utah on August 19, 2019, with his family at his side. He was preceded in death by his parents, two brothers, and one... View Obituary & Service Information

The family of Dr. Michael Jay Shively created this Life Tributes page to make it easy to share your memories.

Send flowers to the Shively family.