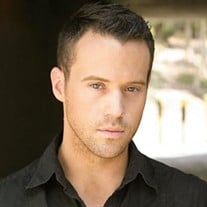 Our one of a kind brother and son, Michael Edwin Raoul Walker, crossed into the next life returning to his loving Heavenly Father on August 27, 2017. Michael was born on August 30, 1982 in Payson, Utah to Edwin and Marie-Chantal Walker. He graduated from Timpview High School in Provo, Utah with honors. He began his college education at Brigham Young University, but put his education on hold for two years to serve an honorable mission in Palmyra, New York where he became assistant to the president and did a tremendous job. After returning from his mission, he finished his schooling while on scholarships at Brigham Young University; graduating with a Bachelor of Arts degree in Communications. He also performed throughout this time at BYU on the US National Championship Ballroom Dance Tour Team. His individual dance talents culminated in earning the North American Latin Junior Champion title. Michael enjoyed the arts including theater, design, dance, art, painting, jewelry making, and all things silver and glittery. He performed in many productions including Romeo in Romeo & Juliet, Midsummer Night’s Dream, Fiddler on the Roof, and The Fantasticks among others. He also won many drama awards. Michael worked hard at the gym, was a master at Zumba and made friends everywhere he traveled. When choosing to focus on something, he always excelled at it as he would devote his whole heart and mind. Michael is preceded in death by his Grandparents Andre Soudan, Sybil and Norman Dabel, Merle and Doris Walker, his Uncles Lamar Walker, Bernard Soudan, and Jean-Luc Soudan, and his aunt Clea Putnam. Michael is survived by his parents Edwin and Marie-Chantal Walker; his sisters Sophia Nelson, Anne Chittum, Alexia Bills, and his brothers Christopher and Weston Walker. Michael also leaves behind his beloved dog, Kiwi. Services are currently pending and this notice will be updated with additional information as we have it. Each person who met Michael was left with an everlasting impression of him; some of us were lucky enough to meet him more than once. He was our shooting star, delighting everyone whose path he crossed, and is gone far too soon. He is missed and loved desperately and unconditionally. Graveside services will be held at 10:00 a.m., Friday, September 8, 2017 at Eastlawn Memorial Hills, 4800 North 650 East, Provo, Utah. Friends may call at the Berg Mortuary of Provo, 185 East Center Street Thursday, September 7 from 6-8:00 p.m. and Friday from 8:30-9:30 a.m. prior to services at the cemetery. Condolences may be expressed at www.bergmortuary.com.

Our one of a kind brother and son, Michael Edwin Raoul Walker, crossed into the next life returning to his loving Heavenly Father on August 27, 2017. Michael was born on August 30, 1982 in Payson, Utah to Edwin and Marie-Chantal Walker. He... View Obituary & Service Information

The family of Michael Edwin Raoul Walker created this Life Tributes page to make it easy to share your memories.

Our one of a kind brother and son, Michael Edwin Raoul Walker,...

Send flowers to the Walker family.