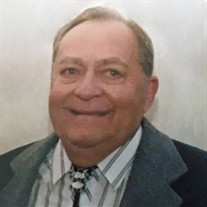 Miles Day Morris passed away at home in Peoria, AZ, on June 13, 2019, from causes incident to age. He was born Jan. 31, 1928, in Parowan, UT, to Durham and Alberta Day Morris. He was raised in Cedar City and attended schools there. He had two brothers, Haymer and Kent, and one sister, Mary, all of whom preceded him in death. In 1948, he met his future wife, Mary Olene Taylor, at a community dance. They were married in the St. George Temple on June 3, 1949. They are the parents of 4 children, Janna (Stephen) Murphy, Daryl (Wendy) Morris, Anne (Jeff) Boatman, and Scott Morris. Miles became interested in automobiles in his teenage years and learned how to repair them. With the help of their father, he and his brother, Haymer, purchased the first Kaiser-Frazer franchise in Utah. They later added Packard and Willys-Jeep franchises. In 1959, his father helped him purchase the Oldsmobile-Rambler-Jeep franchise in Provo, UT. He later added a GMC franchise. His wife, Mary, worked closely with him in the business, as did each of his children and also several grandchildren. After 43 years in business, Miles and Mary sold their business and retired. At this time, they generously donated money from the sale of the business to Utah Valley University, Southern Utah University, and the Boy Scouts of America. Miles served as President of the Utah Auto Dealers Assoc. and Provo Exchange Club. He loved to spend time in his yard and grew beautiful flowers−especially roses−and vegetables, which he loved to share with neighbors and friends. He was also involved with breeding and racing Thoroughbred and Quarter horses. He used one of his horses, Smokey Prince Bar, in advertising for Morris Motors. Smokey would eat sugar out of his hand, thus the slogan “Home of the Sweet Deal” was born. For the past several years, he and Mary have resided in Peoria, AZ, to be closer to family and enjoy the beautiful weather. Miles is survived by his wife, Mary, his 4 children, 16 grandchildren, 31 great-grandchildren, 2 great-great-grandchildren, and his brother-in-law, Dr. John Brown. He was preceded in death by two grandsons, Allen Morris and Michael Murphy. As per his wishes, funeral services will not be held. Graveside services will be held at 11:00 a.m., Saturday, June 29, 2019 at Eastlawn Memorial Hills, 4800 North 650 East, Provo, UT. Friends may visit with the family at the Berg Mortuary of Provo, 185 E. Center St., from 9:30-10:30 a.m. prior to services at the cemetery. In lieu of flowers, please make a donation to Primary Children’s Medical Center in memory of Miles D. Morris. Condolences may be expressed at www.bergmortuary.com.

Miles Day Morris passed away at home in Peoria, AZ, on June 13, 2019, from causes incident to age. He was born Jan. 31, 1928, in Parowan, UT, to Durham and Alberta Day Morris. He was raised in Cedar City and attended schools there. He had two... View Obituary & Service Information

The family of Miles Day Morris created this Life Tributes page to make it easy to share your memories.

Send flowers to the Morris family.