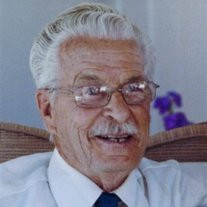 Just two days shy of 67 years of marriage, Miles “Mike” Lee Watters, passed through the veil first, on October 8, 2013, surrounded by his loving family. What a reunion he must have had beyond the veil with his daughter, Michele, his parents, 6 of his siblings, and many other family members that have gone on before. He was born September 24, 1928, in Richfield, Utah, the 4th son of 13 children born to LeRoy and Martha Isabell Bradshaw Watters. Mike grew up on a farm in Beaver, where he learned how to work hard. An electrician by trade, he knew how to fix most anything from cars to skinned knees. He worked very hard to make sure his family always had anything they needed, including the shirt off his back. Mike loved to be outdoors and spent a lot of time working in his yard or playing with the grandkids. He spent the last few years with Alzheimer’s/dementia but still would playfully growl and bark at anyone around or hide and jump out just to hear you giggle. On good days, he would still graciously give up anything he had, his food, his chair, to make anyone around him more comfortable. At a young age, Mike met his sweetheart, Cherie, at a roller skating rink in Parowan, Utah and they were married shortly after he turned 18 on October 10, 1946. Their marriage was then solemnized in the St. George Temple on September 7, 1949. They made their homes in Cedar City, Las Vegas, and finally Provo, where they have lived for the last 39 years. They had five daughters. He was their best friend, greatest advocate, biggest supporter and firmest advisor. He had a strong testimony of his Savior, Jesus Christ, and taught his family to trust and rely on Him always, but especially during the difficult times. He held many church leadership positions throughout the years in his different wards. The family wishes to thank BelAire Assisted Living Center, Envision Home Health (Jolene) and Hospice (Daylene) and Hospice of Utah (Jaclyn and Weston), and his Doctors-Dr. James, Clark, Provo, Michelle Thomas, NP and Dr. Gary Holland for their loving care over the last few months and years. Also, the Edgemont 4th Ward for helping his daughters with their constant watch and care over him the last years. We love and appreciate you! Mike is survived by his wife, Cherie, 4 living daughters: Sharon K Lourenco, Mara Lee Harris, Cherie LeeAnn Craner, and Kim (Scott) Christensen, 21 grandchildren, 42 great-grandchildren and 1 great-great-grandchild; 2 brothers, Carlos (Audrey), Robert, and 4 sisters, Lillie (Leonard) Mackay, JoAnn (Delroy) Jones, Mary (Gordon) Taylor, and Martha Davis. He is preceded in death by his parents, 4 brothers and 2 sisters, his daughter, Michele, and many grandchildren that passed on through still birth and infancy. Funeral services will be held at 11:00 a.m., Monday, October 14, 2013 at the Edgemont 4th Ward Chapel, 4056 North 650 East, Provo, Utah. Family and friends may call at the Berg Mortuary of Orem, 500 North State Street, Sunday from 6-8:00 p.m. and at the church Monday from 9:30-10:45 a.m. prior to services. Burial will be at East Lawn Memorial Hills. Condolences may be sent at www.bergmortuary.com.

Just two days shy of 67 years of marriage, Miles &#8220;Mike&#8221; Lee Watters, passed through the veil first, on October 8, 2013, surrounded by his loving family. What a reunion he must have had beyond the veil with his daughter, Michele,... View Obituary & Service Information

The family of Miles Lee Watters "Mike" created this Life Tributes page to make it easy to share your memories.

Send flowers to the Watters family.