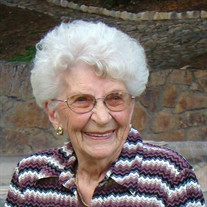 Mima Swain Hill Daniels “Nana”, our loving mother, grandmother, great-grandmother, and great-great-grandmother returned to her family in heaven on May 14, 2015 at the age of 90. She was able to leave this life in the comfort of her home. She was blessed to have a healthy life and graceful aging, which she used to assist and serve others. Born in Wasatch County, Utah, August 4, 1924 to Joseph F. and Lacy Watson Swain, she was the last surviving sibling and second to the youngest of seven children. She married Jack L. Hill, they were later divorced. They had one son Michael J. Hill. She married Eugene C. Daniels October 25, 1968 in Las Vegas, NV, later solemnized in the Provo Temple. One loving step-daughter Peggy McDaniel, she always considered her daughter. Mima was a graduate of Provo High School. She was a member of the LDS Church; she served in many positions over the years. Mima ran the Utah County Visitors Center until her retirement. She was preceded in death by her parents; all of her brothers and sisters; her husband, Gene; grandson; and grandchild. She is survived by Peggy McDaniel, 2 granddaughters, 4 grandsons, 17 great-grandchildren with one on the way and 16 great-great-grandchildren. A special thanks to her grandchildren, Mechelle and Shea, for their care and support over the years and during her illness. The family would like to thank all the caregivers at Hearts for Home Health for their love, support and kindness. Mima also expressed her wishes for all the Courtyard residents to know she loved and appreciated them. Mima will be missed by so many lives that she touched over her 90 ¾ years. Funeral services will be held at 11:00 a.m., Tuesday, May 19, 2015 at the Pacific Drive 2nd Ward Chapel, 507 West 700 North, American Fork, Utah. Friends may call from 9:30-10:45 a.m. prior to services. Interment, Provo City Cemetery.

Mima Swain Hill Daniels &#8220;Nana&#8221;, our loving mother, grandmother, great-grandmother, and great-great-grandmother returned to her family in heaven on May 14, 2015 at the age of 90. She was able to leave this life in the comfort of her... View Obituary & Service Information

The family of Mima Swain Daniels created this Life Tributes page to make it easy to share your memories.

Send flowers to the Daniels family.