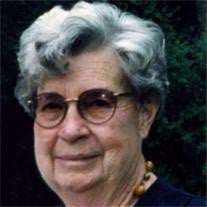 Minnie Ford Kelsch, 92, passed away peacefully Jan. 20, 2011, surrounded by her children. She was born Sept. 9, 1918, in Wallsburg, Utah, the daughter of Ervin D. and Stella Batty Ford. She attended school in Wallsburg and Heber City, graduating from Wasatch High School. She married William L. (Bill) Kelsch, July 26, 1938. Their marriage was later solemnized in the Salt Lake Temple. Minnie and Bill lived in Provo and worked together in their business, “Foothill Shoe Repair” until Bill’s passing in 1985. Minnie then continued the business alone until 2005 when her health no longer permitted her to work. Minnie was an active member of the LDS Church, serving in the Primary for 25 years, counselor in the Relief Society in the “Good Old Provo 3rd Ward”. Her greatest joy was spending time with her family. She loved to travel, fish, and spend time at the family cabin in South Fork, Provo Canyon. She did beautiful crocheting and fine handwork. She enjoyed her association with the Provo Lady Lions. She is survived by her children, Carol Kelsch of Provo, Michael (Mic) R. (Judy) Kelsch of Provo, Joy (Paul) Eves of Orem; six grandchildren; 10 great-grandchildren; sister Doris (Cullen) Batty of Wallsburg; and sisters-in-law Doris (Dell) Ford and Cherry (Vern) Ford. She was preceded in death by her parents, husband and brothers Vern and Dell Ford. Funeral services will be held at 11:00 a.m., Tuesday, January 25, 2011 at the Pioneer 1st Ward Chapel, 400 North 700 West, Provo, Utah. Friends may call at the church from 9:30-10:45 a.m. prior to services. Interment will be in the Provo City Cemetery, under the direction of Berg Mortuary of Provo. Condolences may be emailed to the family through her obituary on www.bergmortuary.com. The family wishes to thank the staff of Trinity Mission Care Center and Hearts for Hospice for the tender care given to their mother. She will be truly missed.

Minnie Ford Kelsch, 92, passed away peacefully Jan. 20, 2011, surrounded by her children. She was born Sept. 9, 1918, in Wallsburg, Utah, the daughter of Ervin D. and Stella Batty Ford. She attended school in Wallsburg and Heber City, graduating... View Obituary & Service Information

The family of Minnie Kelsch created this Life Tributes page to make it easy to share your memories.

Send flowers to the Kelsch family.