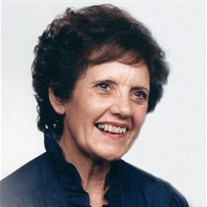 Beloved Mother, Grandmother, Aunt, and Friend, Minnie McCauley, age 97, died on May 8, 2014 in Orem, UT. She was born August 26, 1916 in Los Banos, CA to Italian immigrants Anna Teresa Lapadulla and Giovanni (John) Masullo. She graduated from Los Banos High School in 1934 and attended 4C’s business college in Fresno, CA. She married her high school sweetheart, Reed McCauley, July 25, 1936 in Fresno. They were both 19 and were told their marriage would never last. They were married for 56 years when Reed died of cancer while visiting their daughters in Provo, UT. Minnie followed her husband to air conditioning school in Chicago, IL, to Idaho where they raised potatoes, and then helping run bakeries in several different places throughout CA. They then settled in Fresno where they owned and operated three bakeries together for many years. Later they sold the bakeries and Reed became a realtor and contractor in Fresno. While living in Grass Valley, CA they were baptized on May 23, 1943 as members of The Church of Jesus Christ of Latter-day Saints. Their marriage was later solemnized in the Los Angeles Temple on June 24, 1961. In 1996, after Reed had died, Minnie moved to Provo, UT where she lived out the remainder of her life. Minnie was an excellent cook; growing a large garden each year. Their home was always open to visitors who were treated to a large meal and delicious baked goods that they prepared together. As a mother and grandmother, Minnie is known for her fun, loving and playful spirit. She was and is dearly loved by both her immediate family and many nieces and nephews and will be remembered and missed by all. Minnie is survived by her son, Dennis Reed McCauley (Gloria) of Fresno, CA; daughter, Shirley Ann Morris (Ron) of Provo, UT; son-in-law, Bob Horner (Joan) of Provo, UT; 13 grandchildren; 54 great-grandchildren; and 8 great-great-grandchildren. She was preceded in death by her parents; siblings; husband, Reed; daughter, Joan; and granddaughter, Stephanie Ann Morris. The family wishes to thank Bel Aire Orem assisted living and all of the aides and hospice nurses who lovingly cared for her until the end. Funeral services will be held in the Fresno area on Friday, May 16, 2014 at the LDS Chapel on 1880 Gettysburg Ave, Clovis CA at 12 noon with a family viewing at 11. Interment will be at Red Bank cemetery in Clovis, Calif. Condolences may be sent online at www.bergmortuary.com.

The family of Minnie Masullo McCauley created this Life Tributes page to make it easy to share your memories.

Send flowers to the McCauley family.