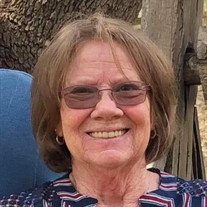 Mona Lea Ladue passed away October 1, 2021, in Delta, Utah. She was born July 20, 1949, in Martinsville, Indiana to Ryan H. Callin and Clarice L Callin. Mona graduated from Dixon High School in 1967. She joined the Navy in 1969. She was stationed in San Diego, California and later transferred to Bethesda, Maryland. Mona was the first woman in the Navy to be accepted into the Cardiopulmonary program in 1971. She served for 14 years in the Navy. In the summer of 1969, Mona met Ralph Ladue at an auto repair shop where she took her car for repairs. Which would chronicle the rest of her natural life. Ralph and Mona married on October 6, 1973, where in following years they had three beautiful daughters Amy, Ana, and Alyssa. Through the throws of life experience, they were later divorced amicably in 1989. Mona had many accomplishments in life in addition to her Daughters, Grandchildren and Service. One of her proudest accomplishments was graduating from the University of Utah with her Master’s Degree as a Licensed Clinical Social Worker, which would give her the absolute pleasure of touching and healing nearly every soul's presence she was graced with. She used her degree to heal many and guide them on their paths most notably through her work in the Utah State Prison, Utah State Hospital, and ending her career taking care of our Veterans in the VA. She did this work for nearly 35 years. Shortly after her retirement she met her partner Robert Patterson with who she thrived and resided with in Lehi until July 2021, when they set out on what was to be a grand adventure and to spend the foreseeable future doing what they love-Traveling. They lived this dream by buying a truck and a fifth wheel with nothing but the wind at their heels and to capture the worlds beauty a day at a time. In tow on the way to their next destination, Fort Desert, an accident occurred that led to a tragedy that will be felt in every heart and moment to come for those that knew and loved her. The Mother, Grandmother, Sister, and Friend who is held so dearly. Mona loved the outdoors, which was her serenity. She loved people and had a way of always finding the best in them. This was her gift. She was a beacon in our darkest nights and she will be sorely missed. She was a Mother to anyone who needed her to be. Her fellowship was timeless and endless. She loved with her whole heart so deeply. Which in return served her greatest treasure to be met with the same love and adoration by all who have known her. Mona is survived by her partner, Robert Patterson; children: Amy Springer, Ana (Chris) Owen, Alyssa (Justin) Wright; grandchildren: Skyler (Hayley) Ladue, Alex (Joe) Ball, Maddie Johnson, Max Owen, Chloe Owen and, Mason Owen, Hailey Wright, Carson Wright, and Addy Wright; great grandchildren: Aiden Ladue and Evelyn Ball; siblings: Bill (Jo) Callin, Jacqulin (Gheorghe) Botosanu, Cathy (Scott) Farley, and James (Carol) Godfrey; 5 nieces and 5 nephews. Mona was preceded in death by her parents, Ryan and Clarice Callin; uncles, Karl Bauer and Bryan Bauer; and grandparents. A Celebration of Mona’s Life will be held at 3:00 p.m., Saturday, October 9, 2021, at the Berg Drawing Room Chapel, 185 East Center Street, Provo, Utah. Friends may call at the mortuary, from 2-2:50 p.m. prior to services. Condolences may be expressed to the family at www.bergmortuary.com.

Mona Lea Ladue passed away October 1, 2021, in Delta, Utah. She was born July 20, 1949, in Martinsville, Indiana to Ryan H. Callin and Clarice L Callin. Mona graduated from Dixon High School in 1967. She joined the Navy in 1969. She was stationed... View Obituary & Service Information

The family of Mona Lea Ladue created this Life Tributes page to make it easy to share your memories.

Send flowers to the Ladue family.