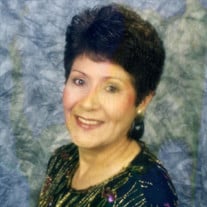 Monica Vieira Meyer returned to her Heavenly Father on December 27, 2018. She was born May 28, 1943 to Alfred Emanuel Vieira and Leanora Justina Fernandes in Ann’s Grove, British Guyana. She attended Catholic schools in Georgetown and attended secretary school before starting a career working at the bank. She married Johann Baptiste Meyer on March 22, 1964 in Port of Spain, Trinidad then moved to Venezuela, where she lived for over twenty-five years. Monica was baptized a member of The Church of Jesus Christ of Latter-day Saints in 1978. She loved taking care of the missionaries serving in her area, and they loved her. She would cut their hair, do their laundry, and feed them on a regular basis. Monica also enjoyed serving others anyway that she could. In 1990, Monica moved to Utah where she then became a citizen of the United States in 2011. She worked for over twelve years as a Certified Nursing Assistant (CNA) and especially enjoyed her time at Orem Nursing and Rehab before retiring in 2012. Monica was a charismatic, kind, and selfless woman. Never afraid to speak her mind, she would always find the energy to see the positive in all things. She was also an outstanding cook—arising every Sunday before 5:00 a.m. to prepare food for her entire family. She loved her Queen (of England), her King (Elvis), and her Jesus and Heavenly Father. A few of her favorite things and hobbies included: Coca-Cola, chocolate, her cute kitties, watching The Price is Right and other game shows, and shopping. But most of all, Monica loved spending time with her grandkids. She is survived by her three children: Annette (and Efrain) Martinez, Johann (and Kimberley) Meyer, and Morevia (and Eugenio) Soto; ten grandsons and three granddaughters; two brothers: George (and Lorraine) Vieira and Albert Vieira; and many nieces, nephews and cousins. She was preceded in death by her husband and by a sister, Elaine Gordon. The family is grateful to her favorite doctor, Gary M. Garner, and to the many other doctors, nurses, and aides who helped ease her cancer pain over the past two and a half years. Funeral services for Carmen Monica Vieira Meyer will be held at 12:00 noon, Wednesday, January 2, 2019 at the Spanish Fork 14th Ward Chapel, 1750 East 750 South, Spanish Fork, Utah. Friends may visit with the family from 10:30-11:45 a.m. prior to services. Interment, Spanish Fork City Cemetery. Condolences may be expressed to the family at www.bergmortuary.com.

Monica Vieira Meyer returned to her Heavenly Father on December 27, 2018. She was born May 28, 1943 to Alfred Emanuel Vieira and Leanora Justina Fernandes in Ann&#8217;s Grove, British Guyana. She attended Catholic schools in Georgetown and... View Obituary & Service Information

The family of Monica Vieira Meyer created this Life Tributes page to make it easy to share your memories.

Monica Vieira Meyer returned to her Heavenly Father on December...

Send flowers to the Meyer family.