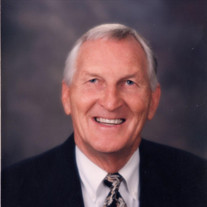 Morris Albert Jackman passed away Friday, April 27, 2018 surrounded by family. He was born in Levan, Utah (hand over heart) on January 7, 1932. Mo, as he was known to all, was an active participant in life rather than a spectator, always striving for excellence in all he did. His work life began at age 9 where he was employed by Muir-Roberts, Co., a fresh produce packer and shipper where he was entrusted with gluing labels on shipping crates. His employment with Muir Roberts would last a lifetime where at retirement he was President and CEO of the company. The youngest of 5 siblings he was always trying to keep up with older brothers which honed his skill as an athlete. He played football, basketball and baseball for Brigham Young High School in Provo where he also graduated as valedictorian. He went on to BYU where he played freshman basketball. However, his true passion then was baseball. He pitched for the Cougars and lettered 4 years. He also played semi-pro baseball. After graduation from BYU he married the love of his life, Carol Dunford in the Manti LDS Temple on July 30, 1954. Their early married life was one of travel and adventure via his service to his country. He entered the US Air Force as a Second Lieutenant and was a pilot who flew C-124 cargo planes ferrying weapons, equipment and troops around the Pacific Rim. He also served as Branch President for an Air Force Group of Saints in Malden, Missouri. After 3 years in the Air Force, Mo and Carol moved back to Provo to raise a family. His athletic passion turned from baseball to golf where he became extremely accomplished. He was Club Champion three times at Timpanogos Golf course. After joining Riverside Country Club he won 8 more Championships. For many years he held the Utah State record for the lowest competitive round of golf, 61. He also served as President of Riverside Country Club. He served in numerous callings in the LDS church. His favorite calling was the 7 years he served with Carol at the MTC in Provo where they taught a class for the incoming, non-English speaking missionaries. Seeing these young people and their conviction served to intensify his own life long conviction to the gospel. Mo was a true competitor and fitness fanatic. His children can recall many Family Home Evenings that ended in sit-up contests or leg wrestling. Of all his athletic and business accomplishments, to him the greatest accomplishment in his life was his family. A devoted father, grandfather and great grandfather he had a way of making each one feel as if they were the most important thing to him. He is survived by his wife of 63 years Carol, children, Cyd and Kent Davis, Maury and Jenifer Jackman, Shelly and Kay Pulver, Clay and Amy Jackman, Andrea and Alex Rosborough, 22 grandchildren, 26 great grandchildren and innumerable souls to whom it felt natural to call him uncle Mo. Memorial Services will be held on Wednesday, May 2, 2018 at 11:00 a.m. in the Edgemont 7th Ward, 555 East 3230 North, Provo, Utah. The family will receive friends at the church on Tuesday evening from 6 until 8 and on Wednesday morning from 9:00 until 10:30. Condolences may be expressed at www.bergmortuary.com

Morris Albert Jackman passed away Friday, April 27, 2018 surrounded by family. He was born in Levan, Utah (hand over heart) on January 7, 1932. Mo, as he was known to all, was an active participant in life rather than a spectator, always striving... View Obituary & Service Information

The family of Morris Albert Jackman created this Life Tributes page to make it easy to share your memories.

Send flowers to the Jackman family.