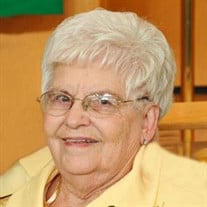 Myrle Shepherd Thurnau passed away peacefully in her sleep on September 26, 2016 at the age of 89 after spending her last days happily surrounded by family. She was born to Lewis Mark and Vida Thomas Shepherd in Tintic, UT on January 3, 1927 and raised in Springville. She married Kenneth Thurnau on November 21, 1945, and was married to him for 55 years until his death in 2001 and together they had four children. Myrle was an active member of the congregation at St. Mark’s Lutheran Church in Provo, and could be found in the front pew every Sunday. She taught Sunday School for over 30 years, even teaching the children of some of the students she’d taught years before, and was part of the Mary Martha Guild service organization. She will be missed by generations of her fellow churchgoers. She suffered from Multiple Sclerosis and had been confined to a wheelchair since 1968. Despite this, she lived a very full life, and lived alone and was self-sufficient for 15 years after the death of her husband Ken. She was always willing to give back, and was a member of the national Multiple Sclerosis Society and participated in many activities and fundraisers. Myrle loved to crochet. She made beautiful afghan blankets and intricate dresses for Barbie dolls, which her granddaughters will cherish forever. She crocheted baby blankets for all her new grandchildren (and sometimes for other people’s kids too!) A basket of yarn was never far from her side. Myrle was preceded in death by her parents Lewis and Vida, husband Kenneth A. Thurnau, her sister Madge Lewis, and her children Lewis K. and Janna Lee. The loss of her two children is something that stayed with her for the rest of her life; she never stopped loving and missing them. She is survived by her sister Mary Miera (Sam), her brother Mark Shepherd, her daughter Kathy Kirtz, her son Clayton Thurnau (Lori), her granddaughters Leaya Townes (John), Sonya Mitchell (Rickie), Melissa Thurnau Gill (Deyall), Sarah Thurnau Denna (Marty), her grandson Jim Thurnau (Amber), many great and great-great grandchildren, nephews, nieces, and countless friends. Funeral services will be held at 11:00 a.m., Saturday, October 1, 2016 at the St. Mark’s Lutheran Church, 464 West 3700 North, Provo, Utah. Friends may call at the Berg Mortuary of Orem, 500 North State Street, Friday, September 30, from 6-8:00 p.m. Interment, Orem City Cemetery. Condolences may be expressed to the family at www.bergmortuary.com.

Myrle Shepherd Thurnau passed away peacefully in her sleep on September 26, 2016 at the age of 89 after spending her last days happily surrounded by family. She was born to Lewis Mark and Vida Thomas Shepherd in Tintic, UT on January 3, 1927... View Obituary & Service Information

The family of Myrle Shepherd Thurnau created this Life Tributes page to make it easy to share your memories.

Myrle Shepherd Thurnau passed away peacefully in her sleep on...

Send flowers to the Thurnau family.