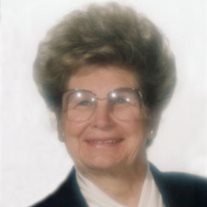 Our beloved mother, grandmother, great-grandmother, and sister passed away on February 4, 2014 to rejoin her eternal companion Karl Herde. She was born on December 11, 1925, in Aurora, Utah to LeGrande and Alima Durfee. While living in Aurora, Myrna learned to work hard on the family farm thinning sugar beets. Later, the Durfee family moved to Provo. She graduated from the BYU Academy High School and began attending the University. It was then Myrna met her sweetheart, Karl Herde who was stationed in Utah before being deployed to the Pacific Theatre during World War II. They were married April 1, 1944 in Provo, Utah. Their marriage was later solemnized in the LDS Logan Temple. While raising her family, Myrna went back to school to receive her Bachelor’s Degree in Elementary Education from BYU. She taught for 21 years in the Provo School District. Her teaching has had a great impact on her family and her students. All of her children, grandchildren, and students grew to love reading books through her influence. She is remembered by several of her students as their favorite teacher. Her students loved her because she genuinely cared about them and their success. As an active member of the LDS Church, she was well known as the “fun” cub-scout Den Leader. Her favorite church calling was Primary President. Myrna’s primary children and cub scouts still comment how much they enjoyed being in Primary or her cub den. Myrna is survived by her children, Gary (Cheri) Herde, Terri (Alan) Rhodes, Sherrie (William) Finlay, Kathryn (Michael) Coons; 17 grandchildren, 12 great-grandchildren and her siblings, Merrill Durfee, Lola Jenkins and Leila Costello. Myrna was preceded in death by her husband Karl, son Eric, and brother Lyman Durfee. Funeral services will be held at 11:00 a.m., Monday, February 10, 2014 at the Oak Hills 7th Ward Chapel, 1038 North 1200 East, Provo, Utah. Friends may call at the church from 10-10:45 a.m. prior to services. Interment will be at the Provo City Cemetery. Condolences may be sent online at www.bergmortuary.com.

Our beloved mother, grandmother, great-grandmother, and sister passed away on February 4, 2014 to rejoin her eternal companion Karl Herde. She was born on December 11, 1925, in Aurora, Utah to LeGrande and Alima Durfee. While living in Aurora,... View Obituary & Service Information

The family of Myrna Jane Durfee Herde created this Life Tributes page to make it easy to share your memories.

Send flowers to the Herde family.