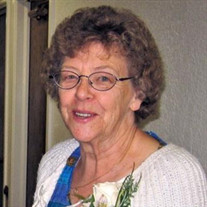 Our beloved Mom (Momma, Mommy) Nadine Jones Bell Smith Caldwell, age 87, passed away peacefully in her sleep on Mother’s Day, May 9, 2021 at her home in Provo, Utah. She had been diagnosed with bladder cancer earlier in the year and while it had taken its toll on her body, her mind was sharp as a tac. Nadine was born June 22, 1933 to Phyllis and Naylor Jones, in Fairview, Utah. She was the middle child between two sisters, Norma and Charlotte, and yes, she had middle child syndrome, we kids heard about it all the time. After high school, Nadine worked at Dugway Proving Grounds for the summer before she started school at BYU and it was at Dugway where she met her first husband, William Edward Bell Jr. They were married on November 8, 1952 and had 6 children together. During this time Bill had a job offer with United Airlines that moved the family to Milpitas, California. Bill died of cancer in California on March 27, 1966. After his death Nadine moved her and the kids to Provo to be closer to extended family. On July 3, 1970, Nadine married her second husband, Ned Steven Smith, and they had one child. The two of them, enjoyed 5 years together until Ned died from complications during open heart surgery on June 15, 1975. Nadine married her third husband, Markel Allen Caldwell, on October 23, 1976 and they had 39 great years together until his death on November 16, 2015. Once all her kids were raised, she decided to work outside of the home and became a secretary at the Utah State Hospital in Provo, she retired from there in 1998. Nadine was a faithful member of The Church of Jesus Christ of Latter-day Saints, serving in many callings over the years as temple worker, primary and relief society teacher, as well as serving in the MIA. She was a pianist for the primary for many years, and occasionally played the organ during sacrament meeting (which made her very nervous). She along with her husband, Markel, fulfilled a lifelong goal by serving a mission to Martins Cove in Wyoming. Nadine always stayed busy, she very rarely sat idle for long. She enjoyed playing her piano; while her kids were growing up, we all knew the harder and louder she played, it was her way of telling us to hurry up. She never yelled. Nadine loved doing any type of puzzle, jigsaw, crossword, or wordsearch anything that kept her mind sharp. She enjoyed having a garden and going for walks, our mother was a very simple woman didn’t need or want for much. Growing up our house was always the house with games going on in the yard and she was out there playing kickball or volleyball or watching us as we played pomp or red rover with all the neighbor kids. Her biggest joy came from her posterity, especially her grandchildren and great-grandchildren. She enjoyed hearing what they were doing and having them come over to visit. She kept up with every one of their lives and always had an extra big smile on her face when they were around. Nadine is survived by her sisters, Norma Melzer and Charlotte Jensen; her children: Jim (Christine) Bell, Allan (Julie) Bell, Debra (Gary) Mendenhall, Carol (Glenn) Hawkins, Alise (Martin) Meyer, Steve (Karie) Bell and LaNae (Evan) Green; her stepchildren she collected along the way, as well as 29 grandchildren and 52 great-grandchildren. Funeral services will be held at 11:00 a.m., Friday May 14, 2021 at the Grandview 5th Ward Chapel, 1555 North 1350 West, Provo, Utah. Friends may call at the Berg Mortuary in Provo, 185 East Center Street, Thursday from 6-8:00 p.m. and at the church Friday from 9:30-10:45 a.m. prior to services. Interment at the Provo City Cemetery. Condolences may be extended to the family at www.bergmortuary.com. We know she is having a great reunion up in heaven with her parents and three husbands “fighting” for her attention.

Our beloved Mom (Momma, Mommy) Nadine Jones Bell Smith Caldwell, age 87, passed away peacefully in her sleep on Mother&#8217;s Day, May 9, 2021 at her home in Provo, Utah. She had been diagnosed with bladder cancer earlier in the year and while... View Obituary & Service Information

The family of Nadine Jones Bell Smith Caldwell created this Life Tributes page to make it easy to share your memories.

Send flowers to the Caldwell family.