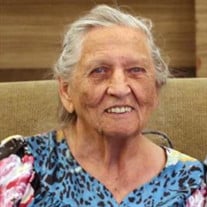 Naida Ruth Crawford Hill Williamson, a celebrated genealogist whose research on David White Rogers resulted in the LDS Church’s revising of official church history, has died. She was 91. Naida was born on March 3, 1929 in Oakland, California, and was the last of five children born to Eva Hamblin and Emil Crawford. She lived in Northern California in various cities: Grass Valley, San Francisco, Benicia, Yucaipa, and Fortuna. The Crawford family was pioneers in growing The Church in Northern California. By the time she was in her late teens, the family had moved constantly; Naida had attended four different high schools before the family moved farther north to Washington, and lived in Kittitas, Kent, and Moses Lake. She was involved in various extracurriculars, such as volleyball, basketball, tennis, team, band, glee club, and drama. After graduating from Moses Lake High School in 1947, she enrolled at Brigham Young University. She declared as an Education major, and became involved in Choir and Drama. In 1950, she was called to a two-year mission to the Spanish American Mission, serving primarily in Texas. Within the two years she was gone, her parents had divorced. Naida moved back in with her mother, and was soon called to be a Stake Missionary. In 1953, she met Melvin Hill, and a year later they were married in Idaho Falls Temple. The couple moved to San Jose, and was called to serve in the Northern California Branch for the Deaf. Within the branch, she was revered as an “Emma Smith” – serving as president of the Relief Society, Primary, and Young Women. Within the next five years, Naida would be gifted with five children: Daniel Rey (1955), Albert Reed (1956), Spencer Reese (1957), Eva Renae (1958), and Melisa Rachel (1960). All of the children were born healthy, with the exception of Renae, who was born with Biliary Atresia, a fatal liver disease. Tragically, she would only survive three years, and died on July 6, 1961. In 1965, Naida enrolled back at BYU – moving all four children to Provo after her divorce. She earned a Bachelor of Arts degree in Art Education in 1967. She married Joseph Williamson in the Salt Lake Temple in 1967. Naida would be gifted again with another child: Kari Ann (1968). The family then moved to Grantsville. She became a substitute teacher while she waited for a full-time position as an art teacher. Naida developed her passion for art by submitting numerous pieces in state and county fairs, and other art competitions throughout the state of Utah. After a second divorce in 1977, she became the Grantsville Middle School librarian and math teacher. As a single mom, she attended summer and night classes at Utah State University, and earned her Master’s degree in Elementary Education in 1983. She retired from education in 1984 and decided to take her daughters back to her home state of California. After her daughters started families of their own, she decided to go back to BYU to get a second Master’s in 1990. This time she would choose to get a degree in Library and Information Sciences. Church callings: Relief Society President, Young Women’s President, Primary President, Secretary to the Stake President, stake missionary, Primary pianist, ward organist, Relief Society cultural refinement teacher, Gospel Doctrine teacher, Primary teacher, and Cub Scout leader. Published Works: • Illustrations of herbs and herb therapy. o Millet, Edward M. (1976). Improving Your Diet with Herbs and Making Herb Therapy Easy. Illustrated by Naida Ruth Williamson. Institute of Creative & Natural Studies, Provo, UT. • David White Rogers. Through Naida’s research, The Church of Jesus Christ of Latter-day Saints officially acknowledged that David White Rogers (her great-great-grandfather) was the only artist to paint the prophet Joseph Smith in person (see Joseph Smith Papers, Vol. 2, p. 483 for the amendment). Naida’s article on David was published by BYU: o Williamson, Naida R. (1995) "David White Rogers of New York," BYU Studies Quarterly: Vol. 35: Iss. 2, Article 6. Available at: https://scholarsarchive.byu.edu/byusq/vol35/iss2/6 o A copy of her published research on David White Rogers in its entirety is available at: https://scholarsarchive.byu.edu/cgi/viewcontent.cgi?article=3022&context=byusq • William Haynes Hamblin. At the time of her passing, Naida was in the process of writing a book about her great-grandfather William Haynes Hamblin. The brother of Jacob Hamblin accompanied him on his missions to Native American tribes in the western states. William was brave, kind, smart, tough, and a great missionary – just like Naida. o As a legacy to Naida and William, their family will finish the book. She resided in Provo until 2019, working on her book, growing her garden, and sharing the Gospel. Naida was a kind, dear, smart, curious woman. She is preceded in death by her parents, siblings, and daughter Renae. She is survived by her five children: Dan (Gina), Reed (Mindy), Spence (Jan), Melisa (Steve Kozak), and Kari (Vince St. Louis); 33 grandchildren, 53 great-grandchildren, and 2 great-great-grandchildren. Naida’s spirit left her earthly tabernacle just after midnight on September 4, 2020, in Lehi. Upon her departure, her daughters, Melisa Rachel and Kari Ann, were by her side. Her family is relieved to know that the oldest of Naida’s daughters, Eva Renae, was there to receive her upon her arrival back home. A Celebration of Life will be held at 10:00 a.m., Saturday, September 12, 2020 at the Provo City Cemetery, 610 South State Street, Provo, Utah. Friends may call at the Berg Mortuary of Provo, 185 East Center Street, Friday, September 11, from 6-8:00 p.m. and Saturday from 9-9:45 a.m. prior to services at the cemetery. Condolences may be expressed at www.bergmortuary.com.

Naida Ruth Crawford Hill Williamson, a celebrated genealogist whose research on David White Rogers resulted in the LDS Church&#8217;s revising of official church history, has died. She was 91. Naida was born on March 3, 1929 in Oakland, California,... View Obituary & Service Information

The family of Naida Ruth Crawford Hill Williamson created this Life Tributes page to make it easy to share your memories.

Send flowers to the Williamson family.