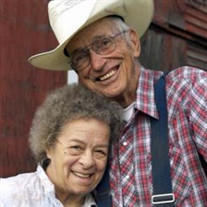 Nancy Carol Johnson Davis, an amazing daughter, sister, mother, and grandmother died peacefully, at the age of 87, in her Provo home on May 8, 2019. She was born on December 2, 1931, in Orem Utah, to George and Nancy “Deloris” Johnson. Nancy attended many different elementary schools in the area, and finished her schooling at Provo High School. Nancy met the love of her life, Wayne, at a local dance, and they were married in Provo on January 7, 1950; later solemnized in the Provo Temple. Together they have five sons, 12 grandchildren, 20 great-grandchildren, and 9 great-great-grandchildren. Wayne and Nancy built a home and raised their family on the same property that Wayne’s pioneer great-grandfather had homesteaded. Their farm blossomed with five sons, an orchard full of fruit trees, a huge vegetable garden, and stalls and corrals filled with animals of all kinds. You were never allowed to leave their house without something delicious to take home. Nancy loved to read, collect dolls, crochet, garden, and research her history, along with spending time with friends and family near and far. Nancy will be missed every day, but most keenly on the Fourth of July, when the entire extended family would gather for a BBQ under her 100 year old walnut tree. Nancy is survived by four of her sons, Chad J (Colette) Davis, Provo, Dell J Davis, Spanish Fork, Roy J Davis, Provo, Lynn W Davis, Provo; brothers, Craig (Ellen) Johnson, Provo, and Dennis (Gayla) Johnson, South Dakota. She is preceded in death by her husband, Wayne Burdell Davis; son, Lanny J Davis; parents, George and Deloris Johnson; sisters, Penny Johnson and Beth Hill, and brothers, Bud and Frank Johnson. Funeral services will be held at 2:00 p.m., Wednesday, May 15, 2019 at the Berg Drawing Room Chapel, 185 East Center Street, Provo, Utah. Friends may visit with the family Tuesday, May 14 from 6-8:00 p.m. at the Berg Mortuary of Provo, 185 East Center Street, and Wednesday from 12:30-1:45 p.m. prior to services. Interment, Provo City Cemetery. Condolences may be expressed at www.bergmortuary.com.

The family of Nancy Carol Johnson Davis created this Life Tributes page to make it easy to share your memories.