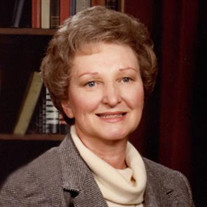 &#8220;Mama&#8221; She could be Aurora, the Sleeping Beauty, so exquisite in repose, ready for her Prince Charming to give the magic kiss that awakens her to a new world and promising new life. As I watch this beautiful child of God slip into... View Obituary & Service Information

The family of Nancy Jane Light Jenkins created this Life Tributes page to make it easy to share your memories.

“Mama”
She could be Aurora, the Sleeping Beauty, so exquisite...

Send flowers to the Jenkins family.