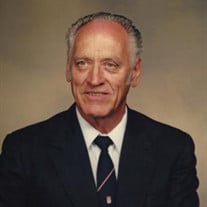 Neldon DeVar Stanley was born November 29, 1927 in Nephi, Utah, to his parents James Robert Stanley and Jennie Elena Stanley. He left this life and entered the next stage of his progression on January 11, 2022 at the age of 94. He was the 4th... View Obituary & Service Information

The family of Neldon DeVar Stanley created this Life Tributes page to make it easy to share your memories.

Send flowers to the Stanley family.