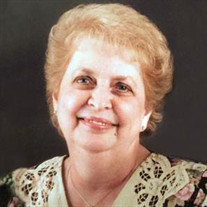 Neola Gleed passed away peacefully on May 6, 2016 in St. George, Utah. She was born to Alma and Lula Anderson on October 30, 1933 in Downey, Idaho. She graduated from Downey High School in 1952. She married J. Guy Gleed on February 20, 1953 in the Logan Utah LDS Temple. They moved to Pocatello, Idaho where they had 2 children, Vicki Lyn and Kent J Gleed. After 9 years there they moved to Provo, Utah where they lived 43 years. While in Provo, Neola worked as a homemaker and accountant for the family business, Utah Valley Dental, until her husband’s retirement. She was active in the LDS church throughout her life. She served in numerous ward and stake church callings as well as an assistant to the General Primary Board. She served as a missionary twice in the Family History Center as well as an usher on Temple Square. After the passing of her husband of 48 years, Neola continued to serve faithfully in numerous church callings, even as her health was failing. She was also a very accomplished and award winning quilter. Her quilts won awards at the Utah State Fair as well the Springville Arts Festival. In July of 2015, she moved to a senior living center in St. George where she lived until her passing. She is survived by her sister Marie Morrison of Tremonton, Utah, her daughter Vicki Willes and her husband Richard of Provo, Utah, and her son Kent Gleed, MD and his wife Lynne of St George, UT. She is also survived by 5 grandchildren and 11 great-grandchildren. Funeral services will be held at 11:00 a.m., Thursday, May 12, 2016 at the Berg Drawing Room Chapel, 185 East Center Street, Provo, Utah. Viewing and visitation will be held at the mortuary on Wednesday, May 11, from 6-8:00 p.m. and Thursday from 10-10:50 a.m. prior to the services. Interment will be at East Lawn Memorial Hills in Provo. Condolences may be expressed to the family at www.bergmortuary.com. Donations in lieu of flowers to The Church of Jesus Christ of Latter-day Saints Humanitarian Fund.

The family of Neola Gleed created this Life Tributes page to make it easy to share your memories.

Send flowers to the Gleed family.