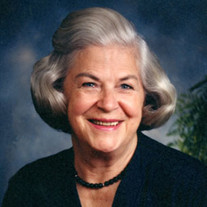 Neva Strate Thomas passed away peacefully on April 13, 2014, after having the opportunity to visit with many family members and friends. She was born in Spring City, Utah, on December 14, 1919 to Frederick Carl Strate and Leah Justesen Strate. She was the third of five children. The family moved to Provo when she was one year old, where she attended Provo City Schools and Brigham Young University. Neva was an accomplished violinist, having started taking violin lessons from BYU Professor LeRoy J. Robertson when she was eight years old. At the age of 14, she was asked to play in the Brigham Young University Symphony Orchestra, which continued through her college years. At BYU, she belonged to the Octo Sorosis Trovata social unit. During World War II, Neva served as a secretary at Eglin Air Force Base in Florida, Shell Chemical in San Francisco, and at the Pacific States Cast Iron Pipe Company in Provo. On September 7, 1946, Neva married the love of her life, Dr. Rex T. Thomas, at the Lion House in Salt Lake City. Rex was doing a surgical residency at the LDS Hospital at the time, after having served as a Battalion Medical Doctor in the 9th Armored Division, including action at the Battle of the Bulge and the Bridge at Remagen. They raised four children together – three sons and one daughter, all of whom have survived her: Richard (Sharleen) Thomas and Karl (Renee) Thomas, Provo, Stephen (Joanne) Thomas, Lehi, and Kim (Billy) McKay, Galveston, Texas. She was very proud of her posterity, which includes ten grandchildren: Tyra (Craig) Cook, Kara (Chris) Henderson, Brenna (Luke) Lapray, Neysa (Dave) Poer, Shanna (Cory) LeRoy, Michael (Stefanie) Thomas, Jeffrey (Valarie) Thomas, Chad (Hillary) Thomas, Katie Thomas, and Marcy (Taylor) Burnett, and 26 great-grandchildren. Neva served as president of the Utah County Medical Auxiliary, the Utah State Medical Auxiliary, Phile Nada of Sorosis, and the Riverside Country Club Ladies Golf. She helped start the Utah Valley Symphony Guild, which she served as vice president. She was a member of the International College of Surgeons Auxiliary and the American College of Surgeons (Abdominal) Auxiliary. She and Rex were founding members of the Riverside Country Club, where she became the first woman to serve on its Board of Directors. She also knitted bandages for leper colonies in the South Pacific and served for many years as a volunteer Pink Lady at the Utah Valley Regional Medical Center. Over the years, she and Rex enjoyed traveling throughout the country and around the world. Together, they made their home a gathering place and created many wonderful memories for their family and friends. Neva was a member of The Church of Jesus Christ of Latter-day Saints. Even in frail physical health, she served as an active visiting teacher and loved her ward and her very special neighbors. She knew that families are forever, and she blessed her family by solemnizing her marriage to Rex in the Provo Temple at the age of 77. Graveside services will be held at 10:00 a.m., Friday, April 18, 2014 at East Lawn Memorial Hills, 4800 North 650 East, Provo, Utah. Friends may call at the Berg Mortuary of Provo, 185 East Center Street, Thursday, April 17, from 6:00 p.m. thru 8:00 p.m. Condolences may be sent online at www.bergmortuary.com. The family expresses appreciation to the people of Alpha Hospice, who have been so kind and considerate, and to the staff and management of Courtyard at Jamestown, who have always shown such love and an abundance of patience and kindness to Neva. In lieu of flowers, the family suggests donations to the Utah Valley Healthcare Foundation, which benefits the Utah Valley Regional Medical Center.

Neva Strate Thomas passed away peacefully on April 13, 2014, after having the opportunity to visit with many family members and friends. She was born in Spring City, Utah, on December 14, 1919 to Frederick Carl Strate and Leah Justesen Strate.... View Obituary & Service Information

The family of Neva Strate Thomas created this Life Tributes page to make it easy to share your memories.