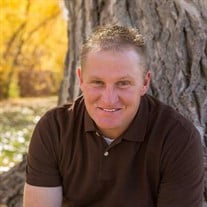 Nicholas Kevin Peterson 35, returned home to his loving Heavenly Father after fighting ALS (Lou Gehrig’s disease) on August 8, 2017 surrounded by the love of his family. Nick was born March 11, 1982 in Provo, Utah to Scott and Karen Peterson. He loved the outdoors, camping, fishing and farming. He lived life to its fullest and was a hard worker. Nick loved the scouting program and received his Eagle Scout award at the age of 14. He graduated from Provo High School, and received his framing certificate from MATC. Nick was called to serve in the Jacksonville, Florida mission and due to medical problems returned home and served a service mission at the LDS Lindon church cannery. Nick was a loving person and tried his hardest to make others happy. He had a strong testimony of the savior and loved him very much. He was a great example and teacher to those whom came in contact with. The experiences and stories he shared while working through this trial were touching to all who heard them, and he stayed strong to the bitter end of this journey. Nick had a deep love of everyone whom he came in contact with. Nick is survived by his parents Scott and Karen Peterson Provo, his twin brother Nate (Amber) Koosharem, Utah, Ashlee Sessions, Provo, and Megan Sorensen (Bryan) 4 nieces and 2 Nephews. His wife Shelisa whom he was separated from Cedar City, Utah. The family would like to express their thanks to Maple Creek home health and hospice for the love they gave to Nick. Funeral services will be held at 11:00 a.m., Monday, August 14, 2017 at the Sunset 11th Ward Chapel, 1560 South 1100 West, Provo, Utah. Friends may call at the Berg Mortuary of Provo, 185 East Center Street, Sunday, August 13 from 6-8:00 p.m. and at the church Monday from 9:30-10:45 a.m. prior to services. Condolences may be expressed to the family at www.bergmortuary.com.

The family of Nicholas Kevin Peterson created this Life Tributes page to make it easy to share your memories.