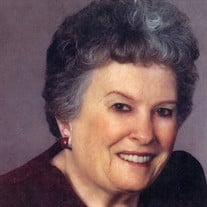 Nona Sharp Liebhardt Cross passed away Thursday, May 5, 2016 due to complications subsequent to a hip fracture suffered in a fall at her home, March 25th. Nona fought the good fight for several weeks until she could fight no more and desired to return home to be with her loved ones who have gone before her. Her family is deeply grateful to the staff of Utah Valley Hospital and Aspen Ridge Rehabilitation for their tender care of this dear, feisty woman. Nona was born April 18, 1927 in Independence, Jackson County, Missouri to Clark Elwood Sharp and Juanita Williams. Her parents and 4 older siblings: Norma Ruhl, Hazel Boyce, Clark Elwood Sharp II and Marvel Crookston have all predeceased her. Nona was married to Edward N Liebhardt of Provo, UT on September 18, 1947 and later sealed to him in the Salt Lake Temple March 17, 1948. Edward passed away September 17, 1987. Nona retired in 1987 when her husband Edward retired from his position at NASA Johnson Space Center, working for Lockheed. They moved to Orem, UT where Edward died shortly thereafter. Nona attended BYU, where she met her husband, Edward, and earned a Bachelor’s degree in Library Science from the University of Nebraska at Omaha, and received her Master of Library Science degree from the University of Huntsville, Texas. Her husband was a Chief Master Sergeant in the US Air Force and the family resided in several places in the course of his career. After her husband’s retirement from active duty, the family resided in Provo, UT; Yuba City, CA where she worked as a Jr. HS librarian; and after receiving her Master’s degree, League City, TX, where she worked as the Audio Visual Librarian at Clear Creek HS. Nona leaves behind Edward N Liebhardt II (Meagen) and grandchildren Matthew R. Liebhardt, Albuquerque, NM; Aidan M. Pickens and Emma G. Pickens of Fairmont, WV; Kerry Lynn Fitch (Michael) of Chantilly, VA and Matthew S. Liebhardt of Orem, UT. She is predeceased by two grandchildren, Daniel S. Liebhardt and Eden F. Pickens. After being widowed for ten years, Nona married fellow ward member Ken Cross on December 6, 1997. She was widowed once again when Ken passed away September 2, 2010. She is survived by three of his four children. Nona was a small woman with a mighty will to succeed in life despite a life-long struggle with hearing loss. She is greatly loved and admired and will be greatly missed by numerous people: childhood friends with whom she maintained a strong bond of friendship for 85 years, many nieces and nephews and their children for whom she often acted as mother and grandmother after the deaths of her sisters, and her many friends in the Lakeview 6th Ward of the LDS church in Orem. Funeral services will be held at 11:00 a.m., Wednesday, May 11, 2016 at the Lakeview 6th Ward Chapel, 2168 South 140 West, Orem, Utah. Friends may call at the Berg Mortuary of Provo, 185 East Center Street, Tuesday from 6-8:00 p.m. and at the church Wednesday from 9:30-10:45 a.m. prior to services. Interment, Provo City Cemetery. Condolences may be expressed to the family at www.bergmortuary.com.

Nona Sharp Liebhardt Cross passed away Thursday, May 5, 2016 due to complications subsequent to a hip fracture suffered in a fall at her home, March 25th. Nona fought the good fight for several weeks until she could fight no more and desired... View Obituary & Service Information

The family of Nona M. Sharp Liebhardt Cross created this Life Tributes page to make it easy to share your memories.

Send flowers to the Cross family.