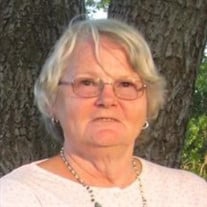 Noreen Scott McFadden, beloved wife, mother, grandmother, and great-grandmother returned to her Heavenly Father on December 10, 2020. She was born August 9, 1942 in Braddock, PA, to Oscar Ray Scott and Francis Rita Lynch. Noreen married Robert LeRoy McFadden on October 26, 1957 in Somerset, Pennsylvania. They recently celebrated 63 years of marriage. Together they raised three sons in western Pennsylvania. Noreen was baptized a member of The Church of Jesus Christ of Latter-day Saints on August 14, 1976. Her marriage was later solemnized in the Washington DC Temple. Through the sealing power of God she will be reunited for eternity with her husband, sons, and all of her posterity. Noreen and Bob started their family at an early age. After raising her boys, Noreen worked as a dental assistant and pharmacy lab technician until she and Bob retired and moved to Utah. Noreen served in many church assignments including Relief Society President, counselor in the Young Women, and Primary teacher. She was a faithful Visiting Teacher. Noreen was a great example of how to be a mother and grandmother. She loved swimming, camping, traveling, 4th of July parades, and Sunday dinners with the family. She loved hosting New Year’s Day meals, Valentine tea parties for her girls, and Halloween parties. She also attended every special family event she could, including birthday parties, baptisms, priesthood ordinations, graduations, weddings, and baby blessings. Noreen was preceded in death by her parents, her sister Suzanne Cain, and a beloved niece, Mary Frances Braun Weston. She is survived by her husband Robert LeRoy McFadden, sons Robert (Lisa) McFadden Jr, Jeffrey (Michele) McFadden, and Scott (Janeen) McFadden. She is also survived by 11 grandchildren, 18 great-grandchildren, and nieces and nephews. A Public viewing will be held on Sunday, December 20, 2020 from 6:00 - 8:00 p.m. at the Berg Mortuary of Provo, 185 East Center Street. Due to Covid-19 restrictions, a private family service will be held on Monday, December 21, 2020. She will be laid to rest in American Fork Cemetery. A recording of the service will be posted online for viewing on the Berg Mortuary website. Condolences may be expressed to the family at www.bergmortuary.com.

The family of Noreen Scott McFadden created this Life Tributes page to make it easy to share your memories.

Send flowers to the McFadden family.