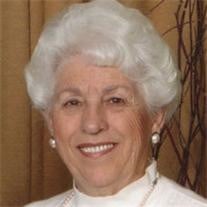 Norma Tucker Anderson passed away peacefully with her family surrounding her on April 17, 2013. She was born in Provo, December 25, 1927 to Russell M. and Lygia Lamb Tucker. We lost our angel as she finished her assignment here to be with her heavenly parents. Here and there, every now and then, God places lovely angels on earth to accomplish unique assignments. Norma has been one of those angels and gave her life to the service of others, her family, church and community; always with a cheery smile and love in her heart for everyone. She left this life on April 17th and will surely be missed by everyone she touched during her mortal life. She lived her entire life in Provo and for the past 62 years in Edgemont with her husband, Bill J. Anderson. They were married on April 19, 1948 and were sealed for eternity by President Joseph Fielding Smith in the Salt Lake Temple. They were blessed with four children: Dr. Julie A. (Dan) Clark, Provo; Mark Tucker Anderson, Provo; Timothy William Anderson, Provo; and Russell Bret (Laury) Anderson, Orem. She leaves behind her husband of 65 years, her four children, 15 grandchildren, and 20 great-grandchildren. As an only child, she was preceded in death by her parents. Norma was a product of the Provo School system where she was an excellent student, active in school activities such as student body officer and social organizations. She graduated from Provo High School in 1946 and attended Brigham Young University where she was a member of the Val Norn social unit and a member of the original Cougarettes. She and her husband, Bill, were life-long friends and classmates though they didn't begin their courtship until they attended BYU together in their freshman year. Norma went to work from college as a secretary at U.S. Steel's Geneva Works and became Executive Secretary to the Manager of Purchasing prior to retiring to raise her four children. Active in church and civic affairs she enjoyed the cultural and performing arts. On one occasion she had the opportunity to attend the World Ballroom Championship at Black Pool, England and witnessed the BYU Ballroom Team become the World Champions. She loved athletics and enjoyed traveling with the BYTU athletic teams and supporting her sons in their athletic endeavors. She and her husband, Bill, were among the founders of Riverside Country Club where she enjoyed golfing and entertaining her friends. She was President of the Riverside Country Club Ladies Association and also served as President of the Ladies Golf Association. She enjoyed playing golf with her husband and traveled to many nice Country Clubs throughout this country and around the world. One of her choice memories was to have played the great St. Andrews course in Scotland, as well as Royal St. Anne's in England. Typical of her willingness to serve others, she was a great supporter of BYU fund raising efforts, particularly for the athletic facilities. As the Utah Valley University began to grow, she joined in support of her husband in establishing a foundation in 1981 and together they chaired the first Annual Presidential Scholarship Ball in 1991. This has now become a significant social and fund-raising event providing scholarships for hundreds of students at UVU. An ardent gardener, her home and yards were always ablaze with colorful flowers. As she was a fine cook, it was always a delight to be at Norma's for dinner and sometimes as many as one-hundred people would enjoy a steak-fry prepared by Norma and her husband. They always enjoyed doing this for their high-school classmates at reunions. She also enjoyed playing Bridge with a group of ladies throughout her life and always loved preparing her home for them and other events. She was an active and faithful member of the LDS Church, living most of her life in the Edgemont 4th Ward where she held various offices and teaching assignments. She very much enjoyed teaching others how to build a happy home through gardening and homemaking skills. She enjoyed temple attendance and did great genealogy work for her ancestry. One of her greatest joys in life was to cross-stitch quilts. Each of her children, grandchildren and great-grandchildren has a prize-winning quilt from Grandma Norma. She even left additional quilts for future great-grandchildren. She was one elegant lady. Services will be held at 11 a.m., Monday, April 22, 2013 at the Edgemont 4th Ward Chapel, 4056 N. 650 E., Provo, Utah. Friends and family are invited to attend a viewing on Sunday evening, April 21st from 6-8 p.m. at Berg Mortuary, 185 E. Center Street, Provo, Utah, and at the chapel before the services on Monday, from 9:30 -10:45 a.m. Interment will be in East Lawn Memorial Hills, Provo, Utah. Condolences may be sent through her obituary at www.bergmortuary.com. The family wishes to express their appreciation for the professional and compassionate treatment she received at Utah Valley Hospital and the Orem Nursing and Rehabilitation Center.

Norma Tucker Anderson passed away peacefully with her family surrounding her on April 17, 2013. She was born in Provo, December 25, 1927 to Russell M. and Lygia Lamb Tucker. We lost our angel as she finished her assignment here to be with her... View Obituary & Service Information

The family of Norma Anderson created this Life Tributes page to make it easy to share your memories.

Norma Tucker Anderson passed away peacefully with her family...