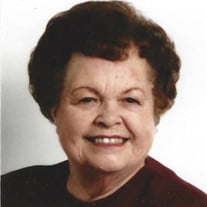 Norma Turpin Gale, age 98, passed away Saturday, October 18, 2014 in Orem, Utah. Her death was the direct result of congestive heart/kidney failure and other issues related to age. She was born January 25, 1916 in Murray, Utah and was the second daughter of LeRoy and Effie Lauretta Olsen Turpin. Effie died of Bright’s disease when Norma was 6 months old. Maternal grandparents, Jacob and Isabella Ross Wilson Olsen lovingly cared for Norma and older sister, Ruth. The girls forever had a dear and motherly connection with their grandmother Olsen. Father, LeRoy Turpin, then married Alice Margaret Olsen (Effie’s sister), who raised Norma and Ruth. Other siblings were then born: a male infant (stillborn), Marvin LeRoy, Phyllis and Elaine. Norma attended University of Utah and Utah State University. She graduated from USU in fall 1938 with a degree in home economics education. Unable to find a teaching position in her major, she accepted a position as an elementary teacher in Altona, Duschesne Co., Utah and began her career October 1938 replacing a teacher who had been transferred. Norma and another teacher named Luella became good friends. Arvil Gale (from Provo, Utah) was writing to Luella and drove to Altona once in a while to visit. Luella introduced Norma to Arvil. In 1941, Norma was offered a position at Bonneyville School in Murray, Utah. Arvil made the trip to Murray every weekend to see her. They married August 5, 1942 in the Salt Lake Temple. Together they established a home in the Franklin area of South Provo where they raised four children. After several years as a substitute teacher, Norma joined the faculty at Sharon Elementary in Orem, Utah and taught kindergarten until her retirement. She and Arvil were active and devoted members of The Church of Jesus Christ of Latter-day Saints. In 1979, they served an LDS mission in Little Rock, Arkansas. After Arvil’s death in 1987, Norma finally learned to drive a car and made regular trips to the Provo Temple as an ordinance worker. With the help of her daughter, Patrena, Norma continued regular temple attendance. Two philosophies Norma lived by were: a woman need never be ashamed of her home as long as it is clean and tidy, and children should be treated with respect and dignity. Norma was preceded in death by her husband, Arvil Stubbs Gale (1987); brother, Marvin LeRoy (Beverly) Turpin (1997); daughter, Alice Marie (Val) Jones (1999); great-grandson, Spencer Max Jones (2003); and sister, Ruth (Everett) Bird (2012). She is survived by three children: Patrena (Jeff) Overton of Provo, Douglas (Cynthia) Gale of Provo, and Roger (Sylvia) Gale of Simi Valley, CA; 16 grandchildren; 27 great-grandchildren; and two sisters: Phyllis (Reed) Bills and Elaine (Frank) Myers. The family wishes to acknowledge Norma’s positive attitude and willingness to adapt when it came time to make a change in her living and care situation. Appreciation is also expressed to devoted family and friends who visited Norma and included her in social activities. Many thanks to Dr. Von Welch and other health providers for attentive care over many years, including the staff at Summerfield Assisted Living during Norma’s 2 ½ years there, and most recently the staff at Envision Hospice. Funeral services will be held at 11:00 a.m., Monday, October 27, 2014 at the Pioneer Park Ward Chapel, 610 West 300 South, Provo, Utah. Friends and family may visit at the Berg Mortuary of Provo, 185 East Center St., Sunday, October 26 from 6-8:00 p.m. and at the church Monday from 9:30-10:45 a.m. prior to services. Interment will be at the Provo City Cemetery. Condolences may be sent online at www.bergmortuary.com.

Norma Turpin Gale, age 98, passed away Saturday, October 18, 2014 in Orem, Utah. Her death was the direct result of congestive heart/kidney failure and other issues related to age. She was born January 25, 1916 in Murray, Utah and was the second... View Obituary & Service Information

The family of Norma Turpin Gale created this Life Tributes page to make it easy to share your memories.

Send flowers to the Gale family.