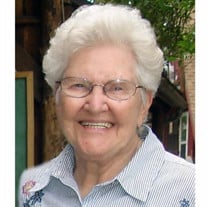 Norma Carter Hope, age 97, passed away peacefully with family by her side, in Hope Mills, North Carolina on October 15, 2021. Norma was born, March 23, 1924 to Leland and Blanche Carter. She was the oldest of their four children. Most of Norma’s childhood was spent on Carterville Road in Orem, Utah. Her family lived in the original log cabin home built by her great-grandfather, John Harrison Carter, and she was one of only a few remaining Utah pioneer Carters for which Carterville Road was named. She married the love of her life, Richard Elmo “Mo” Hope on July 27, 1942 in Heber, Utah. Norma and Mo Hope were married just one month shy of 60 years when Mo passed away in 2002. Norma and Mo Hope built a home in Provo, Utah on a secluded piece of property adjacent to the west side of the Riverside golf course. It was here that they raised their seven children. Norma spent all of her life serving her Lord, Jesus Christ. Even while raising a large family, she and Mo used their personal finances and land to build a small campground for children. This campground was known as “Camp Hope” and was active from 1956 until 1979. The camp was used in ministry to children of their church and community. In 1968, Camp Hope partnered with the Utah Medical Center Pediatrics Department to establish the first world-wide camp for children with Cystic Fibrosis. Even after the camp outgrew the facilities of Camp Hope in Provo, Norma and Mo continued to serve through their volunteer activities in camps for children with disabilities. An excellent cook, Norma was usually managing the camp kitchen while Mo was working as the Camp Pastor. Norma was a lifelong member of the Community of Christ Church where she had been called to the priesthood office of Elder. She also served as a Sunday school teacher, pianist, soloist and women’s leader. Norma and Mo loved to travel and, during their retirement years, spent much of their time traveling across the United States in their truck and trailer. Norma was also passionate about painting and quilting and she shared all of her beautiful artwork with family and friends. Norma is survived by her children: Faith (Jim) Gollnick, Carl (Trish) Hope, Nancy Hope, Rosie (Dave) Klafter, daughters-in-law Robin Hope and Irene Brown; 10 grandchildren: Amber Harwell, Sterling Gollnick, Tammy Hope, Becky Hope, Ray Hope, Candice Hope, Heather Hope, Shawn Hope, Richard Klafter, Cassandra Biltz; her sister Alice Ludlow, a brother Riley (Shirley) Carter; 11 great grandchildren and many beloved nieces and nephews. Norma was preceded in death by her husband Mo, daughter Susan Hope, two sons, Richard Hope and Roger Hope, granddaughter Crystal Hope and her brother Ray Carter. Memorial Services are planned to be held at Timpanogos Memorial Gardens, Orem, Utah in June 2022. Further details regarding the service will be forthcoming. Condolences may be expressed to the family at www.bergmortuary.com.

Norma Carter Hope, age 97, passed away peacefully with family by her side, in Hope Mills, North Carolina on October 15, 2021. Norma was born, March 23, 1924 to Leland and Blanche Carter. She was the oldest of their four children. Most of Norma&#8217;s... View Obituary & Service Information

The family of Norma Carter Hope created this Life Tributes page to make it easy to share your memories.

Send flowers to the Hope family.