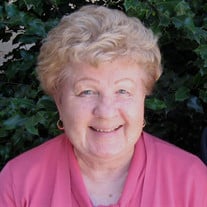 Norma Sumsion Horton was born of goodly parents, Earl Bramall Sumsion and Kathryn Greta Calder Sumsion, on January 13, 1930 at home in Springville, Utah. Norma cherished her family and friends. She was a disciplined student graduating at the top of her class from Springville High School, afterward attending Brigham Young University. She served in the East Central States Mission 1950-1952 where she met her future husband George Alfred Horton (also a missionary). They were married in the Salt Lake Temple in 1952. One of Norma’s defining characteristics was her endless energy. She created her home by her own hard work including homemade bread and meals for a family of nine. She was an extremely accomplished seamstress sewing clothing and draperies and reupholstering furniture. Norma considered one of her greatest blessings to be her family. She supported her husband George throughout his life enabling him to succeed in his many accomplishments. She loved and served her seven children: Sharon (Steve Larson), Orange, CA; Sterling (Adrienne), Kailua, HI; Helen, Silver Spring, MD; Jo Ann (David Seely), Provo, UT; Roger (Teresa), Tucson, AZ; Scott (Debra), West Bend, WI; Holly (Joseph Jensen), South Jordan, UT; twenty-five grandchildren: Christopher (Marisha) and Lindsay (Neal Call) Larson; Jennifer (Sean Medeiros), Michael (Tasha), Kristy (Aaron Scherman), Erin, and Michelle Horton, and Tony (Shi) Woods; Audrey, Brigham, Dallin (Sarah), and Russell Bastian; Rachel (Andrew Grover), Joseph, Kathryn, and Benjamin Seely; Heather and Corinne Horton; Emily (Will Davis), Hyrum, Grant, Hollianne, and Liam Horton; Jonathan and David Jensen; and twenty-two great-grandchildren: Ayda, Evie, and Brayden Larson; Addison Call; Auli'i, Kai, and Koa Medeiros; Jaden and Maya Horton; Hannah and Jacob Scherman; Taylor Sandon; Tony Jr, Marley, and Tyson Woods; Mary Elizabeth, Hannah Ruth, and Rachel Eve Bastian; Miriam, Samuel, and Julia Grover; and Witten Davis. Norma’s great energy and ability to work hard extended beyond her family. She loved to travel and visited 40 countries with her husband during their many assignments abroad. Norma taught piano lessons, worked at Dan’s grocery store in accounts, and was employed full time in the College of Fine Arts at BYU Hawaii as well as Travel Study and Continuing Education at BYU Provo. Of Norma’s many gifts and talents, music played the central theme in her life. She studied the piano and played as a soloist and as an accompanist for choirs and an opera in her youth. Norma began to play the organ in church services at the age of 14 and she has continued to be the ward organist in all of her LDS wards and branches for the last 70 years. She studied organ with Tabernacle Organist Roy Darley during which time she was also an organist at the Mount Olympus Presbyterian Church in Salt Lake City. Norma was the first organist at the BYU Jerusalem Center serving from 1988-1991 while also working as the BYU Travel Study representative for the Middle East. Norma played mini concerts for visiting dignitaries. For seven years Norma was an organist at the Missionary Training Center and played for the Sunday evening devotionals. Throughout Norma’s life, music was one of the primary ways that she conveyed her testimony of the gospel of Jesus Christ. Norma’s testimony: “I want to bear my testimony today of the truthfulness of the gospel. I have always had a believing heart—everything that the brethren taught, I knew was true. I received blessings from my obedience. If I had made a list earlier in my life of all the blessings that I desired, I would have received more than one hundred percent of them. Mostly I am happy to have the blessing of being a wife, mother, grandmother and great-grandmother. Jesus is the Christ, the Redeemer and the Savior of the world. He is our Advocate with the Father. Through the Atonement, all mankind will be resurrected and live again. He is the creator of heaven and earth, the God of the Old Testament, and the only begotten of the Father. Joseph Smith is a prophet of God sent in this dispensation to restore the Church. In the name of Jesus Christ, amen.” Norma is survived by her seven children, 25 grandchildren, 22 great-grandchildren, her brother David (Lenore) Sumsion, and sister-in-law, Beth Sumsion. She was preceded in death by two brothers, Alton Earl (Norma) Sumsion and Stanley Calder Sumsion. Norma’s passing took place on January 30, 2015. Funeral services will be held at 12:00 noon, Friday, February 6, 2015 at the Oak Hills Stake Center, 925 E North Temple Dr, Provo. Friends may call at the church from 10:30 am -11:30 am prior to services. Interment, Historic Springville City Cemetery, at Fourth South and Second West, Springville, Utah. Condolences may be sent online at www.bergmortuary.com.

Norma Sumsion Horton was born of goodly parents, Earl Bramall Sumsion and Kathryn Greta Calder Sumsion, on January 13, 1930 at home in Springville, Utah. Norma cherished her family and friends. She was a disciplined student graduating at the... View Obituary & Service Information

The family of Norma Sumsion Horton created this Life Tributes page to make it easy to share your memories.

Send flowers to the Horton family.