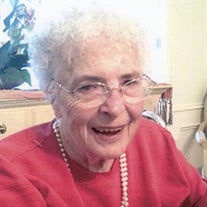 Norma Lizzette Williams Gonzales was born Nov. 5, 1930, in Salt Lake City to Clarence Austin Williams and Lucille Bagley. She passed away peacefully on June 26, 2015, at her home in Provo, UT at age 84. She is survived by her husband of 55 years, Howard Gonzales; four children: Lani, Daniel, Scott and Maria; and nine grandchildren. She is also survived by her sister, Vivian Nicolaysen and numerous nephews and nieces. Norma’s parents were of Welsh and English ancestry and became the parents of five girls, Norma being the youngest. Norma was raised in the LDS faith and standards and was baptized Dec. 31, 1938. She gained a strong testimony of the Gospel of Jesus Christ and ultimately served faithfully in a number of auxiliary positions in the Mormon Church, including that of stake Primary President. She loved the Lord and knew that He loved her. In the mid-40’s the family moved to Oakland, CA, where Norma completed her high school education at Oakland’s Fremont High, always having her eye on enrollment at UC Berkeley. She graduated from Berkeley in 1953 with a major in Criminology. Upon achieving her degree, she immediately pursued a career as a Deputy Probation Officer and hired on with the Los Angeles County on Oct. 5, 1953. She consistently performed in the “upper level of competency” with a rating of “outstanding” in the area of quality. Norma was viewed by the agency as “a sensitive and perceptive individual,” with “high moral and ethical values.” In 1957 Norma was transferred to Long Beach, CA to continue her career with the L.A. Probation Department, a transfer which brought her into the Long Beach 1st Ward, where she met a recently returned Army Serviceman, Howard Gonzales. She put him on “probation” immediately, thinking he should be “checked-out” thoroughly before accepting the date. Their friendship blossomed, and they each soon discovered those precious elements of innate goodness and simple faith possessed by the other. Following a beautiful off-and-on courtship, the two became as one, May 13, 1960, when they were sealed for time and all eternity in the Los Angeles Temple. This was Norma’s goal; she wouldn’t have had it any other way. Indeed, this was a marvelous, spiritually uplifting, learning experience for each of them—one filled with wonder, excitement and some bewilderment. Norma was no stranger to adversity; blows of adversity beset her for a half century: hepatitis, migraines, ruptured aneurysm, brain surgery, blood clots, months of rehabilitation, broken hip, another clot, more rehabilitation, and ultimately, dementia, which led to her passing. The family, for a time, has lost a devoted wife, mother, and grandmother. This good woman has endured adversity with no complaint, being exercised with much faith and unwavering determination—giving much and expecting little. She has shown her family and friends what it means to endure to the end by following “the example of the Son of the Living God.”—2 Ne 31:15-16. Norma learned early on that life becomes a matter of permanent values—friends, loved ones, work to do, and a calm assurance of the permanency of the human soul with an unquestioning belief in the wisdom and goodness of our Eternal Father. Funeral services will be held on Monday, July 6, 2015 at 11:00 a.m. in the Oak Hills 9th Ward Chapel, 1960 North 1500 East, Provo, Utah. Friends may call at the Berg Mortuary of Provo, 185 East Center Street, on Sunday from 6-8:00 p.m. and at the church Monday from 9:30-10:45 a.m. prior to services. Interment, Wednesday, July 8, 2015, at 11:00 a.m. in the Green Hills Memorial Park, Rancho Palos Verdes, California. Condolences may be extended to the family at www.bergmortuary.com.

Norma Lizzette Williams Gonzales was born Nov. 5, 1930, in Salt Lake City to Clarence Austin Williams and Lucille Bagley. She passed away peacefully on June 26, 2015, at her home in Provo, UT at age 84. She is survived by her husband of 55 years,... View Obituary & Service Information

The family of Norma Lizzette Williams Gonzales created this Life Tributes page to make it easy to share your memories.

Send flowers to the Gonzales family.