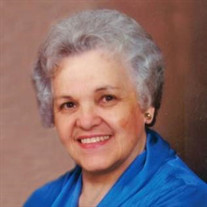 Norma Rae Lowry, age 94, passed away on November 11, 2016, in Pleasant Grove, Utah from natural causes. Norma was born May 24, 1922 in Ogden, Utah to Gertrude M. Rawson and Klesmer D. Lowry. She grew up in Los Angeles and Berkeley, California, graduating from Berkeley High School. She married Raymond O. Lowry of Sophia, West Virginia on December 28, 1941 in San Diego California. Her maiden name “Lowry,” same as her married name “Lowry,” requires explanation even today. Their marriage was later solemnized in the Mesa Arizona Temple of The Church of Jesus Christ of Latter-day Saints. They had four sons, Raymond O. Lowry, Jr., Dennis S. Lowry, Douglas B. Lowry and Keith A. Lowry. They started their married life in San Diego and Los Angeles, then bought their first home in Norwalk, California. In 1954 the family moved to Santa Cruz, California then in 1976 Norma and Ray relocated to Provo, Utah. Morgantown, West Virginia became their home in 1998 and they returned to Utah in Pleasant Grove late March of this year. Norma served in many Ward and Stake positions in the church and was a visiting teacher for most of her adult life. She loved being outdoors and camping with her husband and sons, especially in the mountains. She also loved to travel and she and Ray visited parts of all 50 states and most Canadian Provinces, including Prince Edward Island. They also visited Sydney, Australia and she spent several weeks in Puerto Rico with son Douglas and family. Norma is preceded in death by husband Raymond Sr. and son Dennis and is survived by sons Raymond, Jr., Douglas and Keith, 20 Grandchildren, 53 Great-grandchildren, and 1 Great-great grandchild. Funeral services will be held at 11:00 a.m., Thursday , November 17, 2016 at the Timpanogos 2nd Ward Chapel, 800 North 100 West, Pleasant Grove, Utah. Friends may call at the church Thursday, November 17, from 10-10:45 a.m.., prior to services. Interment, Utah Veterans Memorial Park Cemetery, Bluffdale, UT Condolences may be expressed to the family at www.bergmortuary.com

Norma Rae Lowry, age 94, passed away on November 11, 2016, in Pleasant Grove, Utah from natural causes. Norma was born May 24, 1922 in Ogden, Utah to Gertrude M. Rawson and Klesmer D. Lowry. She grew up in Los Angeles and Berkeley, California,... View Obituary & Service Information

The family of Norma Rae Lowry created this Life Tributes page to make it easy to share your memories.

Send flowers to the Lowry family.