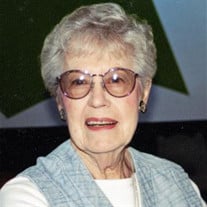 Norma Woodard, 93, passed away peacefully on July 20, 2016 in Provo, UT. She passed in her sleep at the Beehive Care Center, West Center St, Provo. The family would like to thank Cassie, Darla and the staff at Encompass Hospice and Beehive Care Center for the excellent care they gave her. Norma was born May 21, 1923 in Nephi, UT to George and Eva Golden. She married Vaughn Ray Woodard on Mar 29, 1947 in Ft. Worth, TX. She announced her wedding with a Western Union Telegram to her parents in Nephi. “I got married and have a handsome husband.” Norma and Vaughn lived in Ft. Worth until 1959 when they moved to Provo. Norma went to work for Utah Savings and Loan where she was the head cashier and was a member of the Professional Secretaries Assn. After work she was an avid bowler, bowling mixed leagues with Vaughn and ladies leagues with friends. After Vaughn passed in 1991, she continued bowling until she was 80 with friends until she had to quit with physical issues. She was the main caregiver for her parents and siblings in their failing years. In her retirement years she enjoyed jigsaw puzzles, knitting, working in her garden, watching Opra and Dr. Oz during the day and never missed a Jazz game on TV. Her time spent with family, grand and great-grandchildren was always cherished. She was active at the First Baptist Church in Provo. She was preceded in death by her husband, Vaughn Ray Woodard; parents, George and Eva Golden; brothers, Jack (Janice) Golden, Ross (Ruth) Golden; sisters, Helen (Scott) Steel, Grace (Bill) Wheeler, Georgia (Blaine) Rich. She is the last of the Golden Family from Nephi. She is survived by sons; Rick (Sherry) Woodard, Jeff O Woodard; grandchildren: Ryan (Aneda) Woodard, Stacey Christiansen, Danielle (Jeff) Johnson, and Renae Woodard; and great-grandchildren: Riley and Katelynn, Curtis, Ethan, Gracie, Landon, Brennan, Peyton, Aspen, Kayla, Rylie and Masson. Funeral services will be held at 2:00 p.m., Friday, July 29, 2016 at the Berg Drawing Room Chapel, 185 East Center Street, Provo, UT. Friends may call from 12:30-1:45 p.m. prior to services. Interment will be at Timpanogos Memorial Gardens in Orem. Condolences may be expressed at www.bergmortuary.com.

Norma Woodard, 93, passed away peacefully on July 20, 2016 in Provo, UT. She passed in her sleep at the Beehive Care Center, West Center St, Provo. The family would like to thank Cassie, Darla and the staff at Encompass Hospice and Beehive Care... View Obituary & Service Information

The family of Norma Golden Woodard created this Life Tributes page to make it easy to share your memories.

Send flowers to the Woodard family.