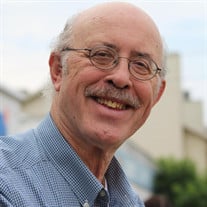 Norman Alexander Darais unexpectedly slipped away from mortality on Thursday, March 17, 2022. Norman was a devoted husband, father, papa, great papa, brother, uncle and friend. Words cannot express how much we will miss him. Norman was born August 20, 1946 in San Bernardino, California. He would spend the first 8 years of his life as a Southern California boy. Throughout his life he never relinquished his title of a Southern Californian. In 1954, the family moved to Provo, Utah where his father, Alex, accepted a job as an art professor at Brigham Young University. After graduating from BY High in 1964, Norman joined the Army Reserve. In 1973, Norman graduated from BYU with a masters in English. He would eventually find himself at the BYU Publications & Graphics department where he dedicated 40 years of his life. He met his beloved wife Judy through a mutual connection while working at the Daily Herald. Norman and Judy were married on June 5, 1971. Last summer they were able to celebrate their 50th anniversary. While working at BYU Norman traveled to conferences all over the country and loved to take Judy with him. Over the years they visited many of the big cities where Norman shared his love of culture and art with his dear wife. Norman had an eye for the beautiful. An antique quarter sawn oak sideboard. A Winslow Homer painting. A piece of black glass. He would always have to take you outside and show you how it actually was purple as light shined through it. He could quote you Shakespeare on demand or reference a line from a poem to add to the conversation. With friends and family, Norman returned year after year to the Utah Shakespeare Festival in Cedar City, Utah. Norman had a passion for sharing the things he loved with all those around him. Of all his passions and amazing qualities, the greatest was his love of giving. The joy of his life was to see a need and fill it. He has blessed countless individuals with his generosity and thoughtfulness to help someone along the way. Whether it was helping write a school paper or commissioning yard work at his house to help a starving student, he was always willing to lend a helping hand. In every sense of the word, he was beautiful. Norman is survived by his wife, Judy; children, Genevieve Cannon and Danny (Jenette) Darais; grandchildren: Kylee Darais, Abigail Darais, Jacob Darais, Alexandra Darais, Kade Darais and Josephine Darais; great grandchild, Kiari Hambric; siblings: Christopher (Vicki) Darais, Marc (Debbie) Darais, Tom (Suzanne) Darais, Damon (Stacey) Darais and Andrea Darais and his dear brother-in-law, Ed Oberbeck. He was preceded in death by his sweet parents, Alex and Norma Darais; his soulmate sister, Tina Oberbeck; his precious granddaughter, AnnaLynn Hope Cannon and his baby grandson, Daniel J. Darais. Funeral services will be held at 12:00 noon, Saturday, March 26, 2022 at the Pleasant View Chapel located at 650 Stadium Avenue, Provo, Utah. Friends may visit with the family from 10-11:45 a.m. prior to services. Graveside service and burial will follow at the Provo City Cemetery. Condolences may be expressed to the family at www.bergmortuary.com. Join Zoom Meeting LIVE: https://byu.zoom.us/j/93758061063?pwd=YlpwOXR5QUtyL1dnQ0xsUkhpRGpMQT09 Meeting ID: 937 5806 1063 Passcode: 732416

Norman Alexander Darais unexpectedly slipped away from mortality on Thursday, March 17, 2022. Norman was a devoted husband, father, papa, great papa, brother, uncle and friend. Words cannot express how much we will miss him. Norman was born... View Obituary & Service Information

The family of Norman Alexander Darais created this Life Tributes page to make it easy to share your memories.

Send flowers to the Darais family.