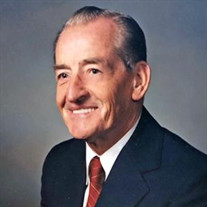 Oliver Storer passed away peacefully at home, Monday, June 24, 2019. He was born February 10, 1922 in Arnold, Nottingham England to Oliver Storer and Keziah Mary Ellis Archer. Oliver graduated from Ellis School for Boys and worked most of his young life in the coal mining industry in England. He married Beatrice Hilda Daley on June 1, 1946 in St. Mary’s Church, Bulwell, Nottingham. He was baptized a member of The Church of Jesus Christ of Latter-day Saints on January 17, 1952. He and Hilda were sealed in the London Temple on December 13, 1958. Hilda preceded him in death on May 30, 2014. Oliver’s greatest importance was his family and his testimony of the restored gospel. He and Hilda immigrated to the United States in 1976. They moved to Salt Lake City where Oliver worked for the Jordan School District and managed apartment buildings. He actively served in Church callings, including District President, Bishop, and the first British native patriarch. His greatest love was to serve as an ordinance worker, which he did for over 10 years in the Salt Lake City Temple. He and Hilda later served a mission in the London Temple from 1996-1998. After their mission, Oliver and Hilda traveled extensively and often returned to England to visit family and friends there. One of their favorite places to travel was Hawaii. He loved spending time with his children, grandchildren, and great-grandchildren, and would often be found playing on the floor letting the children climb on his back, or entertaining them for hours with his pocket handkerchief mouse. He is survived by his three children, Christine (Dennis) Dunyon, Elaine (Brian) Robertson and David (Tina) Storer; sixteen grandchildren, forty-three great-grandchildren; his brothers Ken, Allen and Barrie and his sister Bette. He was preceded in death by his wife, parents, his brothers Cyril, Ronald and Samuel; and his sisters Edna, Eva and Ivy. His family would like to express sincere appreciation to One Care Hospice and their staff for their kind and professional care. Graveside services will be held at 10:00 a.m., Saturday, July 6, 2019 at Mountain View Memorial Estates, 3115 East 7800 South, Cottonwood Heights, Utah. Friends may visit with the family Friday, July 5, from 6-8:00 p.m. at the Berg Mortuary of Provo, 185 East Center Street. Family and friends are to meet at the cemetery Saturday. Condolences may be expressed at www.bergmortuary.com.

Oliver Storer passed away peacefully at home, Monday, June 24, 2019. He was born February 10, 1922 in Arnold, Nottingham England to Oliver Storer and Keziah Mary Ellis Archer. Oliver graduated from Ellis School for Boys and worked most of his... View Obituary & Service Information

The family of Oliver Storer created this Life Tributes page to make it easy to share your memories.

Send flowers to the Storer family.