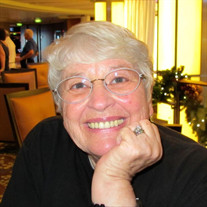 Oneta Bunnell Lichfield (86) passed away on December 14, 2020. She was taken by pneumonia caused by the COVID-19 virus. Oneta was born March 24, 1934, in Provo, Utah to LeRoy and Mildred Potter Bunnell. She grew up in Tremonton, Utah, alongside her older sister Lianne and younger brother Duane. She especially loved her Grandmother Potter, who often stayed with the family and shared Oneta’s bedroom. Oneta was an obedient, diligent, sensitive child who loved school and books. She had her first big travel adventure just after she graduated from High school in 1952. Her Dad took a job in Iran as an agricultural teacher. Her stories of that time in Iran were hair-raising, but the experiences fueled her love of travel and adventure. Oneta met her sweetheart while attending Brigham Young University. She married Ernest William Lichfield in the Salt Lake City Temple of The Church of Jesus Christ of Latter-day Saints in September 1954. Their life together was filled with daughters, travel, pets, and love. Oneta and Ernie raised their four daughters partly in Boulder, Colorado, and partly in Christchurch, New Zealand. They always took advantage of the necessary work-travel and explored all they could along the way. Oneta was game to go and do everything! When Ernie retired, they moved to Albuquerque, New Mexico, where they lived for several years before returning to Utah County. In 1993, Ernie and Oneta built a home in Springville, Utah, where they lived for 25 years. In 2018 they moved to Cove Point in Provo. Oneta was a shining light of friendship and positive energy her entire life. She looked out for anyone who might be lonely. Oneta always had a listening ear and a warm smile. She was slow to anger and quick to express gratitude. Oneta’s ability to find the positive in all situations is a gift she willingly shared with all who knew her. Oneta never met a stranger; she was a friend to everyone (and every cat) she met. Oneta is preceded in death by her parents and husband. She is survived by her sister Leanne Bunnell Foutz of Provo, her brother L. Duane Bunnell of Provo, and daughters and sons-in-law Becky and Steve Himle of California, Cindy and Don McConkey of Colorado, Kathy and Rod Tarullo of Colorado, Jenny and Jerry Horton of Virginia, 14 grandchildren and 27 great-grandchildren. We hold her big smile in our hearts. A private family service was held in her honor. Condolences may be expressed to the family at www.bergmortuary.com.

Oneta Bunnell Lichfield (86) passed away on December 14, 2020. She was taken by pneumonia caused by the COVID-19 virus. Oneta was born March 24, 1934, in Provo, Utah to LeRoy and Mildred Potter Bunnell. She grew up in Tremonton, Utah, alongside... View Obituary & Service Information

The family of Oneta Bunnell Lichfield created this Life Tributes page to make it easy to share your memories.

Send flowers to the Lichfield family.