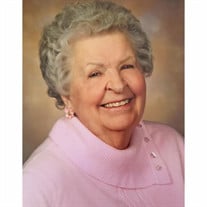 Orem, UT – Ora Mae Little Ferguson, age 97, passed away Mar 15, 2022, of problems incident to age at Timpanogos Regional Medical Center. She was born Jan 23, 1925, in Alpine, UT to Joseph Smith and Clarinda (Holman) Little. Her mother died when she was 2 ½ years old and she expressed how excited she was to be able to see her again after 95 years. After graduating from American Fork High School, Ora Mae attended BYU. She married Elvernon Ferguson Jr. in the Salt Lake LDS Temple in 1944 and was an active member of The Church of Jesus Christ of Latter-day Saints. She served as Relief Society President and many other church callings. Hard work was not a stranger to Ora Mae. She opened her home to many people who were in need and fed them with her excellent cooking skills. She was able to feed, care for, and serve so many because she was so thrifty and penny-wise. Ora Mae was President of the Granada Hills Chamber of Commerce, and PTA President for both Granada Hills Elementary and Granada Hills High. She worked as a cosmetic salesclerk for Savon and a bus driver in Idaho Falls. She is survived by her four children: Jerry Lee (Bobbi Sue) Ferguson of Orem, UT; Michael Ray (Mary Lynn) Ferguson of Salt Lake City, UT; Connie Ferguson McDuffie of Las Vegas, NV; and Dale Eugene (Jan) Ferguson of Draper, UT. She has 20 grandchildren and 46 great-grandchildren. She was preceded in death by her husband, parents, her five siblings, and four half-siblings. Funeral services will be held Monday, March 21, 2022, at 12:00 p.m. in the East Mill Creek 11th Ward Chapel, 2702 E. Evergreen Ave., Salt Lake City, UT with a viewing from 11:00-11:45 a.m. Interment, Provo City Cemetery. Condolences may be sent to the family at www.bergmortuary.com. If you are unable to attend, please join us live at https://youtu.be/2rp0DPl_WI4

The family of Ora Mae Little Ferguson created this Life Tributes page to make it easy to share your memories.